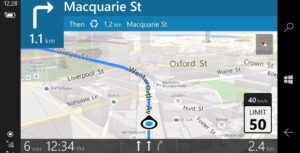 The in-house Windows 10 app for maps receives an update:

Notes can now be added via Windows Ink in Aerial Mode. In addition, you can create your own collections to bundle your destinations.

As with Google Maps, you can now also submit corrections to registered data – such as opening hours of shops. Microsoft also gives developers more room behind the scenes.

“Maps” continues to use data from Bing Maps, nevertheless, Microsoft has enhanced both the surface and the features. For example, in the road view you have the possibility to view the environment in 3D, in order to see mountains and slopes (see screenshot).

According to Microsoft, the latest update also improved the operation in many small ways, thy highlight the possibility to add annotations via Windows Ink. You can even draw lines on the map using Ink lines to measure distances. Works with both a stylus, mouse and keyboard.

The comments allow many personalizations but collections go one step further. Although you could already save places as favorites, but this does not always make sense. Maybe you want to book a place just for a trip – that does not mean that it counts immediately to your favorite places. Just this simple reservation is now done through lists / collections. There you can also place additional notes, for example, if a friend recommended you the visit. You can also add your current location to these collections.

The maps are not only available for PCs with Windows 10, but also for the Xbox One, HoloLens, IoT devices and smartphones with Windows 10 Mobile.On mobile devices, the maps now also indicate in which direction you are looking – this was probably long overdue. You can mark the map itself and then rotate it to get a better look at where you are.

You can also plan intermediate stops for routes, especially useful during sightseeing. Also, you can have a route to the address shown by one of your contacts without leaving the app. To do this, you just have to type in the contact’s name and “Maps” does the rest. Also more information about places on the map is now displayed, such as average ratings for restaurants. And last but not least, there is also a Dark Mode.

This article was originally posted on Technodite.com

MOBILE DEVICE SECURITY – A MUST FOR EVERY ENTERPRISE

Choosing A Pair of Work Boots