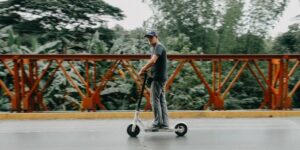 Once regarded as a toy for children, scooters have become a mobility innovation in 2018. Largely designed to cover distances too great to walk but too short to use a car for, many people across the globe have begun to use them for their morning and evening commute.

The original design for scooters as a mobility innovation never truly took off. However, fast-forward twenty years and we can see that the revolution is starting to take hold. Here we look at how electric scooters have become a commuting option and look at whether they will become a regular sight for city centre commuters.

The Original Scooter Concept: Manufactured for Adults, Used by Children

Back in the late nineties, the idea for the original non-motorised scooter was to ‘change urban transportation’. This meant that the popular Razor scooter was never created for kids at all. Instead, it was intended to be marketed as an ‘urban last-mile transport solution’. Back in 1999, before the scooter phenomenon took hold, a deal was nearly struck with Mercedes-Benz to include scooters with the manufacturer’s Smart Cars. However, the scooters were never used in the original intended way. Very few adults used the scooters as a form of transportation, but children used them in their millions.

Changing the Design: The Commute Redefined

According to the entrepreneur behind the original design, he never lost any faith in his product. He just knew that he needed to tweak it to suit his target audience. So, over the course of the next couple of decades, he did just that. He increased the wheel size, ensured that all proportions were suited to grown-ups and added battery-powered motors.

As a result, the transportation revolution has already begun. In its first sign of success, the company launched a dockless rental service, which included e-scooter fleets in Long Beach, San Diego, and Tempe, in America. The craze has become so successful that the scooter company Lime, which operates in America, Canada and parts of Europe, recently received an investment from Uber, with the company currently valued at $1bn.

Will They Become a Regular Sight for Commuters?

Electric scooters already seem to be highly fashionable in America, with Lime users taking 11.5 million scooter and bike share trips in the past 14 months. However, whether they become popular in London and the UK remains to be seen.

Electric scooters are currently not allowed on public roads, but users are calling on regulations to be changed around this, which would make their use more widespread. Now that scooters are also available in Paris, Berlin, Bremen, Frankfurt and Zurich, the UK government is under increasing pressure to change its legislation.

As a result, many people believe that now the ‘scooter genie is out of the bottle’, there’s simply no way back. This is reflected in the availability of electric scooters for adults in the UK, which you can still use on private property.

To conclude, the electric scooter product has taken the American market by storm, and is now branching out into Europe, too. Although it appears as though it may be a while until we see commuters using electric scooters in the UK due to legislation, the rest of the world is already on board with the product. Certainly, scooters are no longer for children alone. However, according to the inventor, they were never meant to be. The commuter scooter revolution is well under way, it’s just 20 years later than intended.