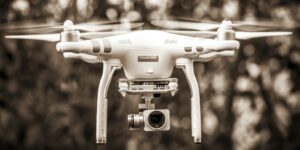 A few years ago, drones were a little-known secret of the military: used to spy, capture location data, and carry supplies. But the technology has developed rapidly, and now just about anyone can own a drone for recreational or business purposes.

This has created unique privacy and security concerns that have people calling for regulation. As drones become increasingly smarter, greater regulation of their use could resolve security issues. Lack of regulation now, however, threatens the safety and privacy of everyday citizens.

Issues with citizen-operated drones are mounting. Hundreds of police reports in the first half of the year recorded drones that went wrong.

In one instance, a GoPro Karm drone crash-landed in the audience at a Major League Baseball game at Petco Park in San Diego. Moving rapidly with its miniature helicopter blades, the drone somehow missed the crowd in the stadium and hit an empty seat.

The operator had been recording images of San Diego for his blog when he lost control of the device over Petco Park. He was not charged, despite the potential for injuries.

Numerous accounts have also surfaced of “peeping tom” drones that took photos of people in their homes. One couple in Utah was arrested when a man they were spying on saw the drone outside his bedroom window.

The victim chased down the flying machine in his truck and picked it up when it landed. The memory was full of videos of people inside their homes, which he handed over to the police.

The couple behind the drone was arrested and charged with voyeurism under a 2014 law that states a drone cannot be used for surveillance of property, persons, or occupied dwellings without consent. Proper laws are not always in place to keep the operators of these devices in check, however.

A more serious issue has been the number of near misses between a citizen-manned drone and a commercial airplane. In 2016, there were more than 650 reports of drones nearly striking an airplane, helicopter, or other aircraft.

If a drone were to strike an airplane, it would be as if a large rock got stuck in the engine. This could cause serious damage to the larger craft and even put it out of commission. Imagine the threat that would pose to a jet with 200 passengers on board.

Regulations are being explored to minimize such a threat, but nothing concrete is in place yet.

Along with the law to protect privacy, the Federal Aviation Administration (FAA) mandated that any hobbyist drones between 0.55 and 55 pounds must be federally registered. More than 626,000 drones have been registered, but many other owners have resisted the regulation.

Some have even taken their concerns to federal appeals court, arguing that it’s unconstitutional to compel drone owners to register. One man was successful in knocking down a 2015 FAA regulation, which only increases public safety concerns.

Since many people have not registered their drone, it’s difficult to track down the owner when an offending drone is caught. Some hobbyist drones have a remote distance of several miles, so locating the operator would be like searching for a needle in a haystack.

People all over the U.S. have called for more regulation of drones for their personal safety and privacy. “Why do we have restrictions? Because we don’t want a drone ingested into an aircraft engine,” Brian Wynne, a licensed pilot and president of the Association for Unmanned Vehicle Systems International, told Tech Radar.

“We have to have rules…. We want to create separation up there in order to maintain the phenomenally high level of safety we have.”

It’s a slow process, but state legislatures are debating the rules that must be enacted to protect the safety and privacy of everyone. Lawmakers have designated particular no-fly zones as well as offered a number of guidelines to protect all parties.

The punishments for disobeying such guidelines are unclear. Unless drone behavior can be linked to another crime, such as voyeurism, most disobedient operators simply get a slap on the wrist and are sent home.

Legislatures are working to clarify or enact laws that require drones everywhere to be registered as well as to designate punishment for people who step outside the guidelines for proper drone usage.

Is Data Recovery Software Important for Us?