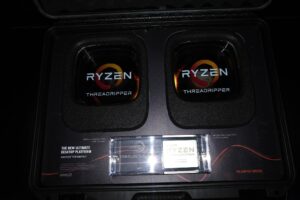 One of the difficulties with firms run by engineers, and most of the successful tech companies are run by engineers, is that they can get lost in speeds and feeds and lose track of fun. Let’s point out what I mean. Do people buy the Tesla because it has big batteries and electric motors or because, in insane mode, it is like having your own personal roller coaster and it makes sounds come out of friends mouths you’ve never heard before? Basically, the Tesla sucks when it comes to a lot of things we need a car to do largely because you can’t refuel it quickly but it looks good and you won’t have more fun 0-30 in anything short of a Dodge Demon, now there’s a name, on a drag strip except you don’t need a drag strip. Oh, and it is a tad like stepping into a car 10 years in the future. In short you don’t buy a Tesla for transportation, you buy it because it is awesome and you are into “awesome”.

This takes me to AMD’s Threadripper. Do you need it to write in word? No. Do you need it to game? No. Do you want it because it is called “Threadripper”? Probably but you’ll have a hard time admitting that. In short, what makes Threadripper stand out is that it is the most awesome processor currently in market and while, like the Tesla, it is certainly not a cheap date, when you have someone over to see your rig and point out it is a Threadripper rig you will likely see more than a little envy drool come out of their mouths. Now if you are into apps like Photoshop or Final Cut Pro there is real value beyond just having the most powerful thing in your neighborhood but I think the awesome part is the most interesting.

Let’s talk about why Threadripper is awesome.

It Starts With The Name

There is a ton of power in a name. For instance, fans of Game of Thrones have good a tad nuts over buy Huskies thanks to their love for the Dire Wolves in Game of Thrones (not a good idea by the way). The Names of the wolves are/were Summer, Lady, Shaggy Dog, Ghost, Gray Wind, and, of course, leader of the Mega pack, Nymeria. Now which wolf would you want? Likely Ghost or Nymeria (granted it helps that these two survived). Now imagine the wolves’ names were Artard and Dingy (the link is to stupid dog names that people should avoid using). I’m not even sure I’d watch the show let alone want one.

When you say you have a Threadripper system the implication is that this system is more powerful, more capable, and more awesome than anything with a letter and number designator. Some more examples, without even knowing the cars. Which do you think is more awesome? Viper or LFA, Mustang or Camaro, Corvette or Corvair, Spyker or Riviera, Phantom Corsair or A7? Let’s take the first example, by any measure the LFA is the more advanced car, but wouldn’t you rather be able to say you drove a Viper? LFA doesn’t convey anything. The same with the A7, by Audi, it is a fantastic car but the name doesn’t convey any of that. (The Phantom Corsair is my personal favorite car name, against almost any other car name it just sounds awesome).

Threadripper is like that, it just sounds kick ass and given you are going to put hours into a system build why not have the result, from top to bottom be awesome.

I was at the Threadripper launch and those of us that participated got a case of ThreadRipper (that is the picture at the top). This case was like what you might see for a high-end weapon. Heavy duty, water tight, and when you opened it the two Threadripper processors were backlit in packaging that was consistent with the name. The boxes look like mini nuclear reactors and clearly stand out from the generic packaging most processors are delivered in. The only problem is that they look so good boxed I hated to unbox them. But presentation is often a major part of any premium experience, just look at the difference between unboxing an iPhone and unboxing a much of what comes out of China. In the latter case the packaging mostly works, but the experience with the iPhone sets the bar.

It isn’t just the processor, just look at some of the motherboards that you can get for this thing. For instance, the Asus ROG which I have is simply over the top (and even though it is a whopping $550 it is sold out now). It has, count them, 8 DIMM slots for up to 128GB of system memory, will handle 3 M.2 drives, has WiGig for wireless VR (which doesn’t really exist yet), OLED lighting, and 10G ethernet (good luck finding a home 10G router). Under “Awesome” in the dictionary there should be a picture of this card as an example. Just looking at the specs in this card a little bit of drool still forms in the corner of my mouth. The thing is insane.

16 cores, 32 threads, 40MB of cache, and a huge socket. This is the PC equivalent of a V16 engine in a car. You may not need it but the lust factor is potentially off the chart. To be clear this is really a part for folks that like to use tools like Photoshop that are massively threaded more than gamers because most games aren’t. However, my current favorite game is Ashes of the Singularity, I even bought and read the book (it was a decent read) and this game will use every core you throw at it. I’m at the point now where the game is less about winning and more about creating huge epic battles I can watch.

Even how you mount the processor is unique. I have one caution though, finding a water block for this processor is a bit of a problem right now and I’d be tempted to wait until I could order one. Soonest for me is the 25th of this month so it isn’t that bad, though, given it is coming from China I’ll likely not see it until early September.

The system I have was built using a Thermaltake 3.0 Triple Ring RGB High Static Pressure Fan cooling system which isn’t bad but I prefer a more custom setup.

Wrapping Up: How Often Do You Get A Chance At Awesome?

Building a Threadripper system isn’t going to be cheap. On the other hand, when compared to building an over the top car, plane, or boat it is a true bargain and it is just cool to be able to afford to do something awesome from time to time even if you aren’t a billionaire.

What makes Threadripper great is less about its specs and more about what it conveys, a sense of power and whimsy, a bit of a consider the future, and the chance for exclusivity you won’t really get with anything else that is even remotely affordable now.

Suddenly I’m excited about building my own awesome system again and I think that is a lot of what AMD’s Threadripper brings to the table. That little extra excitement that and the chance to create a bit of envy in your friends and neighbors.

Put Your Foot Down With Toronto Roach Removal