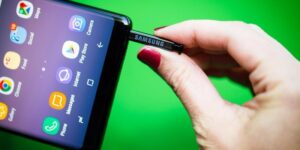 The new Samsung Galaxy Note 8 is a massive step forward for Samsung after the hardware issues the company was charged with in the previous model. The overpowering specifications of the phone place it over most other cellphones in competition, and if you want to buy the premium phone of 2017 than there might be no better pick.

The following areas are where the specs have been stepped up.

It has often been stated that the Note series is an all-touch alternate to the regular Galaxy series because it offers the use of S-pen and has a friendlier design. Note 8 boasts a massive screen of dimensions 162.5mm x 74.8mm x 8.6mm, and the fingerprint sensor is now located at the right rear beside the camera lens, as opposed to the discontinued Note 7. The water and dust proof design of Note 8 is also one of its main differentiating elements.

This phone possesses the new and enriched infinity (edge to edge) display which not only increase screen space without a significant addition to the width and length of a screen, but also provides maximum touch utilization.

Galaxy Note 8 has Android Nougat pre-installed which is faster software relative to the Marshmallow installed in Note 7. What sets this new phone apart is the App Pair option which allows users to use two apps at once, significantly raising the bar of convenience offered to uses. The GIF creating option ‘Live Message’ is also a new addition to this magnificent design and the phone is characterized by the use of Samsung’s very own virtual assistant: Bixby.

Note 8 has spectacular camera features and the best Samsung has ever released too. In this release you can get your hands on a dual lens camera of 12 megapixels. One lens is regular while the other is wide angle, which means that now your phone’s optical zoom in can go up to about twice of what it did without significant decrease in quality. The front camera of Note 8 is 8 megapixels, which is greater than the 5 offered by the previous Note release.

The battery valuing at 3300 mAh is complemented by the fast type-C charging which the Note 8 offers, and it is claimed that the batteries are absolutely safe to use.

Note 8 comes with multiple internal storage options including 64, 128, and 256 GB internal memory respectively which means that you can have an extended storage phone instead of investing in a new micro SD card. In addition, Note 8 also provides users with the option of expanding their memory externally which means that now all your smartphone memory related issues should be conveniently solved.

This deserves a separate mention because even though the release was made with Note 7, the battery issues had the phone discontinued. Now people can enjoy maximum emoji usage interface thanks to the S-Pen, which means that your digital expression of yourself just got a lot easier and cooler.

Optimizing your Office Space for Ergonomics