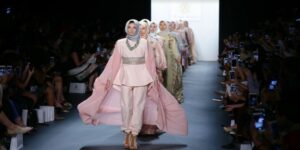 Modest fashion – is it a fad or something here to stay? A seemingly new type of fashion, modest fashion is being defined as fashionable clothing that is:

Clothing that fits that description has been around for a long time but it’s never had much of a name and it certainly wasn’t all grouped together into any kind of category.

The Advent of Modest Fashion

In the past few years, things have changed quite rapidly with the rising number of designers, bloggers and trend setters in the fashion industry channeling their energy towards making modest fashion a ‘thing’ and it seems like everyone’s jumping on the bandwagon.

Modest fashion has been popping up more and more in write ups about increasingly bigger fashion brands and it’s caught people’s attention enough that we’re theorizing about the reasoning behind this sudden uptick in attention.

Why would modest fashion be taking off in a time when we’re simultaneously celebrating the rule of yoga pants and rewriting school dress codes to no longer punish the desire to wear tank tops? It seems like the two ideals are worlds apart and, on the surface, perhaps they are. But they’re co-existing nonetheless.

The modest fashion movement has attracted so much attention that even the likes of brands such as Dolce & Gabbana and Tommy Hilfiger have decided to create their own interpretations of luxury abayas and hijabs, two of the most quintessentially modest items of clothing out there – and almost certainly the first ones that come to mind when the term modest fashion is thrown out.

We’ve seen hijab wearing women grace the runways of fashion shows, seen Nike create the world’s first ever sports hijab and Muslim fashion is now an undeniable thing. Muslim people are most likely one of the biggest driving forces behind the success of modest fashion.

With over a billion Muslim people worldwide, that makes sense. It’s a huge, largely untapped market. Until now. Young Muslim women are the target consumer for fashion brands marketing modest clothing – they have the greatest amount of buying potential and the success of any line depends on the interest of this market.

Modest fashion is not strictly consumed just by people of the Islamic faith. Yes, Muslim people are very often the target market of modest wear but modest fashion has always had consumers – it’s just that they weren’t being catered to by the markets. They certainly didn’t have advertising campaigns targeting them directly!

Women of all faiths who used to resort to excessive layering and employing the use of tailors and seamstresses so that they could dress in the way they pleased are now being offered choices that appeal to them in stores and it’s not just the hijabs that are being snapped up by happy consumers.

This brings us back to the question of why? Why is it – how is it that modest wear has an existence in a time when people are celebrating a fascination with the human body and its shape, when sheer ball gowns and crop tops are beloved and there have been steady inroads into changing what, if anything is indecent when it comes to clothing?

The Diverse Evolution of Fashion

To understand the way fashion has evolved – to make sense of the changes – we need to look at how the world as a whole has changed. Diversity is being accepted in a way that it never has before. People are less afraid to deviate from the so-called norm, both as designers and consumers. Though there’s still a long way to go, we’re seeing the repercussions of a world where acceptance is being so widely preached and they’re looking good!

Fashion is a form of expression and as women the world over are discovering their voices, it’s only apt that we see the rise of what may seem like conflicting trends and successes because this is the first time that it’s ever been possible to offer this kind of choice. For decades women were confined to certain trends but as we as a human race embrace diversity, so is the fashion world changing to reflect that new found acceptance.

Modest fashion’s trending right now but it’s not likely that it’ll go the way of many other short lived fads. It can’t live right at the top forever but the demand for modest wear is unlikely to completely disappear any time soon even once the high’s worn off.

How DagPay and Dagcoin can Revolutionize your Business

Smartwatch vs. Fitness Tracker: Which Device to Choose