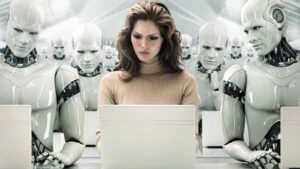 At least I HOPE it is. This last week was the launch of NVIDIA’s Jetson TX2 platform for affordable AI and their technology is already making it into a number of things similar to this Starship Technologies delivery robot which is being approved in Virginia. Yes, many of us will soon have little six wheeled R2D2 like devices sharing sidewalks with us as they deliver our goods to our doorstep. Personally, no matter how annoying these things might become they couldn’t be any worse than OnTrac which consistently either fails to deliver timely or leaves my crap out where it could be stolen and/or in the rain. (Which, by the way, is just peachy for electronic gear).

The Jetson technology provides advanced navigation, image recognition, and problem solving capability to robotics using a common form factor thus spreading the development cost across a wide variety of hardware. At the launch this ranged from a small personal drone to a large targeted piece of farming equipment that could, with high procession, apply herbicide to crops.

Let’s talk about what happens when AI gets cheap.

Up To Our Butts In Robots

This is along the lines of how personal computers got started. The first personal computers were largely unique to vendor and wicked expensive. My first portable computer, the Panasonic Sr Partner, which I bought in the late 80’s cost $2,800 ($6K in today’s dollars) and it was a 35 or so pound beast. Once components got standardized costs dropped sharply and today you can buy a 3-pound laptop that is a ton more powerful for 1/10th the cost. We went from hundreds of personal computers when I came out of college in the 1970s to hundreds of millions today.

We are on the front end of a similar revolution with the proliferation of drones already spreading from military all the way to consumer use, robots moving from manufacturing towards the home (initially in the form of digital assistants like the Amazon Echo), and even vehicles that can drive themselves are expected out of test and onto roads in volume by the end of the decade.

Surprisingly we’ll even have human flying drones in service by year end in Dubai. The rate of change is unprecedented yet with this low-cost brain that NVIDIA is bringing to market we likely haven’t seen anything yet because it dramatically lowers the cost of entry for those that want to explore this opportunity and creates the potential for a shared learning platform.

With computers, we had three legs needed for a viable project. Hardware had to be affordable, there needed to be an operating system like DOS, Windows, IOS, or Android to make the hardware viable, and there needed to be critical number of applications that made the result useful.

While the first two legs with robotics are largely the same the third leg is actually the training that makes the artificial brain capable of making decisions. This is one of the things that has held back large scale AI efforts like IBM’s Watson, the training is wicked expensive, takes an excessive amount of time, and is very resource intensive.

However, as more and more firms enter this segment I expect there will be a level of training automation and information sharing that will begin to materialize and the end result will be the creation of a very unique service that will allow an AI to be trained quickly and far more easily. Once this is done then the training wheels will come off this market and the potential for robotic growth will likely come close, if not exceed, what we now have for Personal Computers and maybe even approach smartphones. Whoever gets this right will likely become the new Intel, Microsoft, or Google and NVIDIA is clearly at the forefront of this hunt with Jetson.

The NVIDIA Jetson TX2 launch showcases that the first two legs of the coming robotic market are complete and we are now waiting for the third leg, optimized and relatively inexpensive training, to become established before the robotic market goes vertical. Even at this early stage the level of advancement is nearly unprecedented but nothing like we will shortly see. Companies in the hunt range from startups to giant multinationals like IBM and when the dust settles I expect we’ll see a new company hierarchy. NVIDIA has an early shot at the top but is being pressed hard by Intel and Qualcomm among others. The only thing that is sure is that we are mostly certainly about to be up to our butts in robots.

What Should I Do Before I Start My Own Business

Exclusive Ideas on How to Maximize Your Holidays