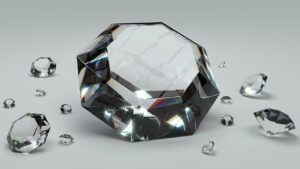 In the previous several years, we saw a disturbing amount of political instability all over the world. All of this, has a particular way of disturbing the market, as well, seeing as how in the moment of crisis, people lose trust in stocks and currencies. Now, the stock issue affects only people who are investing or have already invested, however, the currency trend change is something visible to absolutely everyone. After the Brexit, the pound plummeted, while the same thing happened with the USD after the 2016 elections.

Not all is that grim and there’s always the other side of the coin for you to consider. You see, when people start losing trust in currencies and stocks, they start investing in commodities. This is why diversifying your portfolio is a good idea (as well as something we’re going to discuss later on). When it comes to commodities, we’re most likely talking about precious metals, however, diamonds seem to be as popular. Furthermore, it seems as if the diamond market might experience a proper boom in popularity in the nearest future, which is why it might be worth exploring some more.

1. Consistency throughout the history

When it comes to the western world as a whole, it’s quite obvious that diamonds were seen as a luxury good pretty much since the ancient world. While this doesn’t necessarily have to be a guarantee of anything, it’s more than clear why diamonds may be a more reliable investment than trends that have just emerged.

Most importantly, this also means that if you’re looking at the investment in the long-run, you can’t really lose value by investing in diamonds (or gold for that matter). Even if the price of the commodity reaches its all-time low (which is highly unlikely), it’s bound to bounce back at one point. This means that your investment won’t be wasted even if it means leaving it to the next generation (as an heirloom) to collect. Think about it, what kind of turmoil would it take for diamonds to suddenly turn worthless, while it’s not so hard to imagine a similar scenario with a company (provided that you’ve bought their stocks) or a cryptocurrency (provided that you’ve invested in them).

While it is true that rarity plays a much bigger role in the value of the commodity than its pragmatism does, there’s still the fact that diamonds are much more practical (from a physical standpoint). Think about it, what’s easier to carry around (in a purse) or store (in a safe) $100,000 in gold or $100,000 in diamonds? This is a question that virtually everyone knows the answer to. Earlier on, we talked about diamonds (commodities really) as potential heirloom, so what’s simpler, giving your nephew a diamond or a gold bullion? Sure, this isn’t necessarily the first thing you need to think about but it is a factor worth including into the equation.

In theory, buying when the value of a trend is falling is the most lucrative course of action, however, investing while the trend is growing is both safer and more intuitive. This is why the majority of investors looks for promising trends, knowing that joining early on tends to be almost as lucrative as joining the market beforehand. In that context, diamond trend in Australia is currently on a steady growth of 13.8 percent per year. This is why using companies like Australian Diamond Portfolio to insulate your assets from a traditional fiscal market might be a particularly good idea.

In fact, over the course of just 10 last years, the value of rough diamonds has jumped by staggering 33.7 percent, which is about one third of their previous value. If anything, this testifies of growth as a trend instead of it being a simple fluke.

Another thing you need to keep in mind is the importance of diversifying your portfolio. No matter how lucrative your investment is, keeping all your eggs in one basket is definitely not a good idea. This is why a lot of investors prefer to keep 10 to 20 percent of all of their investment money in precious metals like gold and silver.

On the other hand, while these markets do abide by different rules, they too tend to fluctuate. So, if you aim to preserve your funds in the nearest future (next several years) and not just pass funds and legacy, it might be even more efficient to split this commodity-investment money between precious metals and diamonds. In this way, you’re making your wealth even more secure.

In the past, the American Giant, De Beers dominated the market and while they still hold a huge chunk of it, they’re not nearly as dominant as they were in the past. This is great from the standpoint of individual investors, seeing as how one party doesn’t hold the power to change the course of trends at their own behest. While it is uncertain whether things on this front may change (which is fairly unlikely), at this moment, investing in diamonds sounds like an excellent idea.

One more thing that’s preventing this monopolization is the fact that the market is internally segmented to synthetic and natural diamonds. At one point, it seemed as if these lab-grown diamonds might threaten the value of the natural ones, however, nowadays they abide by a different set of rules and belong to vastly different markets.

While this is not necessarily a new thing or a new trend, you need to understand that a proper research may as well be the cornerstone of any successful investment. Of course, there are some rules of the market that you won’t be able to understand without the interpretation of a skilled economist, nonetheless, there’s so much you can do on your own. Keep in mind that making any kind of investment without adequate research and preparation beforehand is no short of insanity. Therefore, you need to do all that’s in your power to prepare yourself accordingly.

Top 5 Makeup Academies and How to Choose the Best