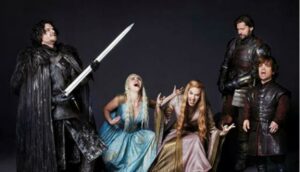 We’ve been covering Game of Thrones for a long time here on TG, and it broke another ratings record. Fans are also shocked that a major character on the show, Jon Snow, was killed.

Or was he? Usually a celebrity death brings out numerous conspiracy theories, and now funny enough, there’s speculation that Snow may not really be dead, and could return.

As Emilla Clark told the Hollywood Reporter, “It’s a 50/50 chance,” while the showrunners, DB Weiss and David Beinoff, saying he’s absolutely dead. There’s a lot of fan theories out there as to how he could have survived, much like a lot of people are in denial when a death happens, and Clarke said cryptically she has “no idea” if the character’s really gone. “They know that I can’t lie very well. I can with all honestly say I have no idea what’s happening.”

There’s speculation he could be brought back by magic, but like we saw in the making of Star Trek II: The Wrath of Khan, director Nicholas Meyer was furious that the studio gave a way to bring Spock back. His attitude was, if you’re gonna kill a character, kill ‘em, and don’t play with the audience. So if Snow comes back from the dead, they’re going to have to do it well, or just leave him dead or it’s just going to seem silly.

Yet Another Hoverboard Annoucement