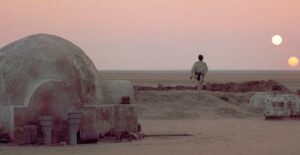 No, Isis is not trying to expand its reach to outer space and try to take over the universe like Darth Vader, but the news has hit that they’ve tried to take over where Luke Skywalker grew up, namely Tatoonie, or Tunisia as it’s better known as in real life.

As the Daily Beast tells us, there was a CNN report that ISIS took over a way station in Tunisia, where the desert parts of Star Wars were filmed. As it turns out, Isis claimed they attacked a museum in Tunis, but they didn’t take over the famous area from Star Wars, although that makes a more interesting story of course.

There is a Star Wars fan club in Tunisia, who went crazy with the news that Skywalker’s farm could be under siege, but a rep for the government finally debunked the story. (There are Star Wars fans who make the pilgrimage to Tunis to see where the movie was filmed, but the government does recommend you stay out of these areas for while…)

So thankfully those dastardly Isis bastards haven’t hit us Star Wars fans where it hurts. While they’ve certainly done worse deeds, making a strike against the geeks would be pretty awful sh*t to pull.