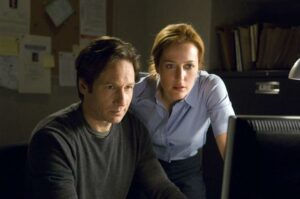 It’s been speculated for months, but now it’s pretty close to official that The X-Files will be returning.

This news is coming from reputable sources like CNN, but they’re quoting a geek site, TV Wise. Still, if the reports are true, and they probably are, both Gillian Anderson and David Duchovny would be on board for an X-Files reboot, and according to the social media reaction, the fanbase is still out there in force.

CNN re-reported one tweet from a fan who exclaimed, “That loud sound you heard a few minutes ago was my head exploding from joy.”

Duchovny has a new series coming up in May on NBC, Aquarius, where he plays a sixties detective, but he’s recently said, “It looks good; that’s all I’ll say. It looks very good.”

According to a report on Consequence of Sound, the show could be shooting again this summer, and Blastr reports that the show could be a “short-stack” order, meaning it could run ten episodes or less, which would fit in with Duchovny’s new schedule.

Drones May Soon Get the Okay to Deliver For Amazon