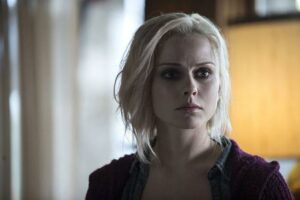 It’s being called an undead Veronica Mars, which makes sense, because it was also created by Rob Thomas, the same man who gave us Veronica Mars. Ratings have been okay so far, and the reviews for the most part are pretty good.

The Hollywood Reporter calls it “a clever new drama,” and it centers around Liv, a med student who turns into a zombie, then goes to work in a morgue, where you can clearly get a lot of procedural work done. (And eat a lot of brains as well.)

New York Daily News called the star, Rose McIver “a charming zombie,” and HitFix wrote that the show is already off to “a fine start.” The L.A. Times calls it “smart, scary and fun,” and i09 raved, “IZombie is so good it makes us mad at other TV shows.”

So if we’ve gotta have more zombies, we’re glad it’s with a much different twist than the usual undead fare. Here’s hoping iZombie will keep up the good work, and Thomas will deliver another great series with it.