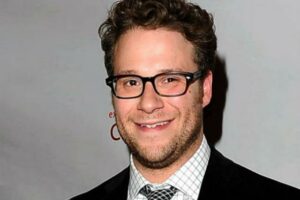 Everyone knows Seth Rogen inhales, no big news flash there. The guy definitely likes his weed, and now his penchant for pot smoking has made Hollywood news, because departed Sony executive Amy Pascal isn’t fond of the smell of weed coming from his office.

Pascal still has a production deal on the Sony lot, and as the Hollywood Reporter tells us, it wasn’t bad enough that she lost her job, thanks to her e-mails getting leaked in the wake of The Interview, but now she can’t move into her new office, formerly occupied by Rogen, because it reeks of weed.

According to the Reporter, “the smell is so bad that it has seeped into the flooring…one frequent visitor says the fumes could be smelled on the third floor of the building.”

Rogen tweeted, “I don’t know what’s more irresponsible: that they would print a story that is completely untrue, or that they would refer to how pot smells as a ‘stench.’”

Suicide Squad Behind the Scenes

Guardians of the Galaxy Set to Sweep the MTV Movie Awards