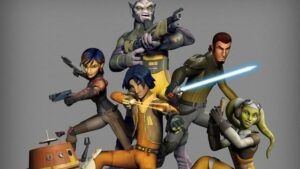 Buffy the Vampire Slayer was a cool show, not just because it resurrected a Joss Whedon idea that was poorly executed on the big screen, but because it also opened the door for better writing and storytelling on television.

Now Buffy herself, Sarah Michelle Gellar, is heading into the Star Wars universe, joining the animated series Star Wars Rebels, which is on Disney XD. As the Hollywood Reporter tells us, there’s no word on what her character will be, but her husband Freddie Prinze Jr is part of the cast as well.

The director of the series, Dave Filoni, said in a statement, “Sarah is a true Star Wars Rebel fan and her passion undoubtedly comes through in the voice-recording sessions.”

Rebels takes place between the Star Wars chapters III and IV, and as Filoni told Collider, the initial idea was to do a Star Wars A-team that fought for Jedi justice. With a second season underway, with a guest spot in January from Frank Oz, Filoni’s also hoping for more seasons that will give the story the right arc to be told in its entirety. “I am a very big stickler about a game plan,” Filoni said. “I don’t like to stick to it, but I need to know where we’re going.”

Metallica to Re-Release Their 1982 Demo on Record Store Day

ID4 Has Its Replacement For Will Smith