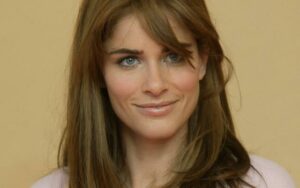 David Benioff has been humping around in Hollywood for many years as a screenwriter. He wrote the Spike Lee movie The 25th Hour with Edward Norton, Troy, and X-Men Origins: Wolverine. Finally, Benioff, along with D.B. Weiss, both hit pay dirt when they brought Game of Thrones to HBO.

You may also know that Benioff’s wife is Amanda Peet, who just told Conan that she thought the show was a terrible idea. In this case, of course, the jokes write themselves, because it’s hard to think of anything good that Peet’s ever been in in a million years.

“Yes, I thought it was a terrible idea,” Peet said. “Terrible. Just silly. Dungeons and dragons but with real people.” However, the resulting show changed her mind. “Now I’m obsessed,” she said. As People reports, one time she visited her husband in his office, and she covered her eyes because he had storyboards for the show on the wall, and she didn’t want to accidentally see any spoilers.

We assume Peet will be tuning in, along with millions of others, on April 12, when season five of Thrones begins.

X-Men TV Series in the Works