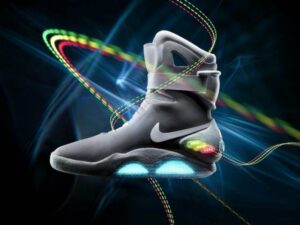 Okay Back to the Future fans, we know how much we all want the hoverboard, but it’s still years away, if it will ever come. Same with flying cars. But self tying shoes? They’ll be here this year, or so Nike promises.

As Esquire tells us, Nike is officially putting these shoes late this year. Nike put out a version of them in 2011, but they didn’t have the power laces. They’re a very expensive collector’s item today, costing $8,750 (!) if you want a pair.

CNBC tells us that Tinker Hatfield, the Nike designer who created the ones we see in the movie, promises that the shoes available to the public will light up and indeed be able to tie themselves.

We certainly hope the new power laces version won’t cost anywhere near as much as the 2011 versions, but as Esquire tells us, the nu model shoes should be ready by the end of this year. And if they’re reasonably priced, I can imagine a lot of us wearing them while we’re in line to see Star Wars.

Will These Women Lead Ghostbusters 3?