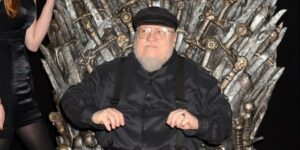 Many people in Hollywood are furious that Sony buckled to terrorists by withdrawing the movie The Interview. Now George R.R. Martin is so mad, he’s offered to play the movie at his own theater.

As IGN reports, Martin owns the Jean Cocteau Cinema in Santa Fe, New Mexico, and he invited Seth Rogen to come down and show the movie. On his blog, Martin said Sony “wimped out,” and not releasing the movie was “a stunning display of corporate cowardice.”

Martin also wanted to show Team America: World Police, where the South Park gang took on a puppet Kim Jong, but Paramount now won’t allow that movie to be shown either. Martin added, “It’s a good thing these guys weren’t around when Charlie Chaplin made The Great Dictator. If Kim Jong- Un scares them, Adolf Hitler would have had them shitting in their smallclothes.”

We still hope that once all this nonsense dies down that The Interview will be shown, and that this could end up being the best free publicity the movie could ask for. On one hand, we understand that if anybody’s safety could be at risk you don’t want that to happen, but at the same time you don’t want to five in to a bunch of cowards making threats from behind their computers either.