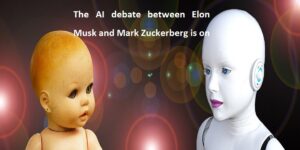 Elon Musk and Mark Zuckerberg think that we are in 2017 and it’s time to leave the old age debates to high school kids. These two giants think it’s time to argue about a more pressing issue – Artificial Intelligence.

If you are a science fiction enthusiast, then you’ve probably watched the Terminator. The big battle for survival that happened between the soon to be extinct human race and Skynet, the globe’s synthetic intelligence, was seen as fiction. Fast forward to 2017, and Elon Musk says the Terminator is no fiction. We could be fighting the same survival battle with Artificial Intelligence if care is not taken.

In case you are not aware, the AI gurus call this era of intelligence Weak Artificial Intelligence. And just look at where we’ve come to. The creation of sex robots, military robots, robots that serve as security guards and robotic firefighters. If all these are seen as Weak AI, then when we enter a period of strong AI, I’m sure you know what would happen. We would completely be replaced by robots.

Being replaced by robots is not what Elon Musk is even worried about the most. Just like the Terminator, Elon Musk thinks Robots could turn the world into a place where ‘survival of the fittest’ will become the order of the day. What if robots begin to think for themselves?

They are not self-thinkers right now and they are able to serve as sex robots and fire fighters, if they are able to think, won’t they want to have their own president? Won’t they want to have ministerial representatives and parliamentarians? And when that happens, would we allow them? That’s when the fight begins and robots could wipe us out. According to Elon Musk, if governments don’t come into the picture with a sort of regulation, the world would surely be ruled by robots.

But that’s not what the social media founding guru and investor thinks. Mark Zuckerberg says he is optimistic and that the bad side of Artificial Intelligence is being blown out of proportions. He is asking Elon Musk to keep it low and not hype things to make it look like the future is bleak.

According to Mark Zuckerberg, AI is coming to change the world and make it a better place. That, he says, he’s optimistic. And he’s, therefore, calling naysayers to rethink Artificial Intelligence, which was directly in response to Elon Musk’s comments about the need for a regulation for AI.

We are all in this argument together

These two giants can argue all they want, AI is coming and it’s big. Though we are all talking about AI, we aren’t certain, for now, as to how beneficial or devastating it would be if it becomes any of the two – a blessing or a curse.

But tech giants and physicists and all those interested in AI are certain of one thing – AI is bringing a lot of benefits to the human race and at the same time coming with a huge negative impact depending on how we handle it.

One of Britain’s most prominent and revered academic physicist, Professor Stephen Hawking believes that AI undoubtedly is the next big thing that would change humanity. But he has also warned that if nothing is being done to manage it, AI could become the greatest tragedy ever produced by man, adding that it could serve as the invention that would end the human race if we can’t manage the high risks that this technology brings.

When Ray Kurzweil in his Age of Spiritual Machines hammered on the exponential growth of the computer surpassing the human brain by 2020, how would we have thought that things would really come to this? What Ray Kurzweil said is here

The outcome is simple. We cannot stop AI because of possible devastating effects in the future. It’s good to cultivate the benefits that come along with such a technology. On the other hand, precautions should be taken because, just like every technological invention, there are prices to pay and the price we would pay on AI would be much bigger.

Saibu Baba is a freelance writer, web developer, and a cryptocurrency enthusiast. When he’s not freelancing, you’ll find him doing what he love most: playing cards with his mom . Connect with him on twitter or Linkedin for more interesting stuff.

6 SEO Mistakes You Should Never Do Again in Your Life