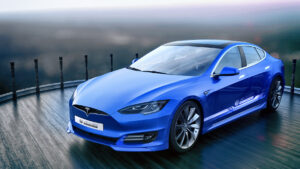 Mercedes has a high end tuning division that takes their regular street cars and given them near superpowers. I drive a new Mercedes GLA45 AMG myself and the highlight of that car is a 4 cylinder, 2.0 Liter engine putting out a whopping 375 horsepower. In addition, they make some body and interior modifications that make the little SUV look fast. (As a side note check out Mercedes “Born To Be Wild” 2017 Super Bowl ad, it’s a keeper). But not only doesn’t Tesla advertise much they didn’t even have something like an AMG even though their top end cars could dust supercars, and some drag cars, 0-60 times. Teslas fast cars look pretty much just like slow cars.

Well, just like AMG started out separate from Mercedes as a Mercedes tuner, there is company called Unplugged Performance but they have a unique problem that Corning could fix.

Now, unlike Mercedes who used typical gas engines in their cars, Tesla uses electric power plants and because they do full software updates remotely increasing the actual performance without being a part of Tesla for any lasting time would be nearly impossible without taking over support of the car and currently Unplugged doesn’t do that. But what they can do is massively reduce the weight of the car which has the same impact of improving performance numbers and they create a series of Aero Kits that can make a Tesla S or X look as fast as it actually is.

The end result is basically the same as what AMG did for Mercedes before they were acquired and became part of the company and I wouldn’t be surprised if, at some future point, Tesla bought them and like Mercedes used them to create a more performance oriented top end line. However, other than the fact they can’t really alter the engine of the Teslas one other problem has come up the Windows. On the Tesla S, to reduce weight, they replace the heavy glass with Plexiglass but on the X, because it has a massive overreaching windshield and a very complex door structure they’ve decided not to do that. In addition, while lither, Plexiglass tends to scratch which is why we don’t usually use it for car windows.

Corning To The Rescue

At CES this year Corning showed of their new Automotive effort using Dragon Glass. Around 30% lighter than regular glass, scratch and nick resistant, and with better optical clarity this is exactly what Unplugged Performance needs to both cut the weight of the cars they modify without reducing the safety or appearance of the car.

This is similar to what happened with Smartphones, initially they had plastic screens which didn’t shatter but scratched and often yellowed. Glass was thought to be too brittle and to address the need for something as robust as glass with regard to scratching but far more resistant to breakage and Dragon Glass was created which has the added benefits of both being harder to scratch and apparently being much clearer when you look through it.

In the end these three companies working together could help Tesla create an AMG like division with similar benefits and even stronger performance.

I think the AMG effort at Mercedes is brilliant and I also thing Tesla needs to complete the pivot to a higher performance car with a higher performance AMG look and experience. Unplugged Performance appears to be the closest thing to a Tesla AMG like offering in the market but they desperately need to reduce the weight of the glass in stock Teslas, that is where Corning could come in and in the end Unplugged Performance should be part of Tesla and get Corning to help them finish their high-performance solution.

Having cars look faster than they go is a problem, having them go faster than they look is another. With Corning and an AMG like effort, Tesla could more aggressively go after the selling opportunity that Mercedes with AMG nearly owns. We’ll see if Elon Musk gets the memo.

How to Drive Your Online Store Conversions with Image Gallery Optimization

Marvel: The Journey from Comics to Machines