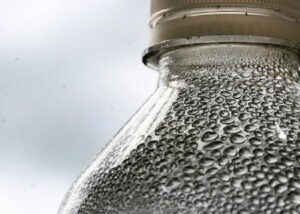 Did you know that there are more than three quadrillion gallons of water just floating around in the air?

Climate change has made it abundantly clear that water will become an even more precious resource in the coming decades. Although the freshwater rivers and lakes from which we source drinking water may dry up, scientists hope that advanced technology will allow them to harvest this atmospheric water as a new supply.

We’ve already reported on a wind turbine concept that plucks water from desert air, but that’s hardly a practical investment for your average individual. Now, new developments from a company called NBD Nano suggests this technology may be in our hands sooner than previously thought. The company has pioneered a bottle that can refill itself with drinkable water harvested from the air.

Like many of the most innovative clean tech companies, NBD Nano’s amazing water bottle concept was inspired by Mother Nature. The company’s founders noticed the Namib Desert Beetle is capable of thriving in e extremely dry environments because it’s capable of absorbing water from the air.

“Every morning this beetle climbs to the top of a sand dune, sticks its back to the wind, and drinks 12 percent of its weight in water,” said NBD cofounder Deckard Sorensen in an interview with PRI. “We use nanotechnology to mimic this beetle’s back so that we too can pull water from the air.”

In the novel design, the water bottle’s surface is coated with hydrophilic and hydrophobic coatings, and then a fan is used to pass air over the surface. The water condenses on the surface and, eventually, the water bottle refills itself. The design could operate using a rechargeable battery or solar cell to speed-up accumulation and filter the water.

Obviously, this technology could have a huge impact, especially in developing nations where other types of water filtration are hampered by a lack of infrastructure. NBD hopes to bring this off-grid water bottle to market by 2014.

3 creative ways companies have stood out from the competition

Airconsole, your smartphone is the gamepad