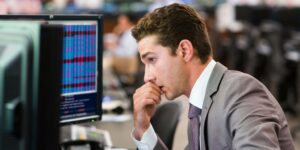 Despite the perception that the world is in turmoil and the world economy is in shambles, stock markets have been growing at a steady rate. The Dow Jones, for example, has grown some 60% in the last five years, whereas savings account interest rates have plummeted to a fraction of a percent.

With the influence of Hollywood movies like The Wolf of Wall Street (that has nothing to do with wolves roaming around Manhattan), and the easy access to petabytes of information on the world wide web, you would think that the younger generation would really be into buying and selling stocks. But on the contrary, even the more “mature” investors have turned their back on stocks. There are %20 less stockholders among Americans than there were in 2007. This is mainly due to the loss of confidence in the stock market and banks in general, after the big crash of 2008. Recent ups and downs in the market are not helping people regain their trust in the market either, although it might still be the best place to invest.

The absence of interest and young investors in the stock market might sound like bad news, but it is a great chance for creative entrepreneurs to snatch a part of this market, where traditional banks and brokers are failing to. Like nearly everything else today, the secret of success lies in apps.

Software development has come so far that it is no longer a monster task to build a stock trading app. The tools necessary for building such an app are easily accessible, and luckily there are enough companies who will deliver a professional product for a reasonable price.

It would not be the best strategy to aim for the Gordon Gekkos of this world, there are enough big banks and brokers who are covering that section of the market. Like any other app, the masses are the secret to success. Robinhood took a good approach in offering a free basic plan, where users can trade for free (which is usually not the case), and paid plans for customers who need more options and better services; most probably offsetting the income from one with the expenses of the other, to provide a free, easily accessible mobile trading platform.

Trading stocks is a complicated business, involving brokers, real-time prices and timely money transactions, but the magic word is API (Application Programming Interface). Thanks to modern technology you don’t have to reinvent the wheel every time, all you need is the proper framework to communicate with the right gateway, sending and receiving the information you need. The main task is finding the right balance between functionality and simplicity, and making the whole package attractive for the end user, bon chance.

There are thousands, if not millions, of people looking for THE great idea to launch a successful app. Some want to revolutionize social media, the way we communicate or how we shop. No matter what we do, at the end of the day (maybe unfortunately) money talks, so it can’t be bad idea to help people make it, instead of always finding new ways to make them spend it.