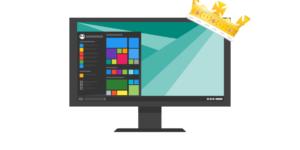 When it comes to computer operating systems, there used to be just one choice. Windows had cornered the market to such an extent that it would have been reasonable to assume that they would become to operating systems what VHS became to video cassettes.

However, the situation has not turned out to be quite that simple. The huge fightback that the market has seen from Apple over recent years, along with freeware options from Linux, have combined to erode Microsoft’s market share to less than 50 percent. Here is an objective look at the pros and cons of the most popular operating systems.

As the Daddy of them all, let’s look at Windows first. It has been around for more than three decades, it is something we have all used, and just about any driver, application or game that you can think of will be compatible. It is also fabulously well supported. If you have a problem, there is certain to be someone else who has experienced the same thing and can help you out.

Nevertheless, it is far from perfect. You will need good antivirus protection if you are running Windows, and it is also quite heavy on PC resources, so you might find that your machine runs slowly, particularly when you are running Windows 7. There is the cost to consider; Windows 10 will set you back at least $100, and that is only if you can get it at a reduced price.

If Windows is the Daddy, then strictly speaking, Mac is the Granddaddy as it has been around even longer. The latest generation of MacBooks has seen Apple take a larger and larger chunk of the premium laptop market.

Your typical Mac has all the pros of Windows from a user’s perspective, and you are far less likely to have problems with viruses. The OS also tends to run more smoothly, although the support network is just as strong as it is for Windows. If you are wondering why your mac is running slow, you can be sure there will be someone out there to provide the answer.

Until recently, a potential downside was the issue of compatibility, but over the past year or so, Macs have become so popular that this is becoming less relevant. In fact, the only real con is the price tag; there is no question that Apple’s is a premium product and is priced accordingly.

Linux is the brave new world’s freeware competitor to the big players. The major advantage is that Linux is open source and will not cost you a penny. There are a variety of similar freeware apps that you can bundle with it, which work in a similar way to MS Office.

As for the cons, it’s important to keep in mind that there is no such thing as a free lunch. Linux is more complicated to work with and looks like the poor man’s version of Windows that it is.

Which is the best?

The systems are all very different, and each caters to its own market. If price is a deciding factor, Linux is a no-brainer; if you want the best of the best, Apple is a compelling option.

How to Choose the Best Handheld GPS System?