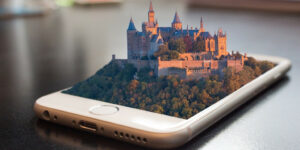 What is 3D Rendering?

This isn’t a term most people use in their everyday work, but it’s quite ubiquitous in our day-to-day experiences.

“In the most basic terms, 3D rendering is a two dimensional representation of a computer wireframe model that has been given properties such as texture, color, and material,” Easy Render explains. “You see 3D renderings every day, but most of the time you probably don’t even notice.”

“The 3D rendering process depicts this three-dimensional scene as a picture, taken from a specified location and perspective,” 3dRender.com notes. “The rendering could add the simulation of realistic lighting, shadows, atmosphere, color, texture, and optical effects such as the refraction of light or motion-blur seen on moving objects — or the rendering might not be realistic at all, and could be designed to appear as a painting or abstract image.”

The Benefits of 3D Rendering

Whether you’re a designer, architect, engineer, entrepreneur, artist, or consumer, 3D rendering has practical value for your life. Here are some of the ways it contributes to society.

One of the more common applications for 3D rendering technology is in architecture and design. Though occasionally used in public-facing situations to provide clients and public officials with a sense of what the completed project will look like, it’s used even more during the internal design process.

3D rendering and visualization software allows architects and designers to turn cold CAD designs into videos, images, and even 360 presentations. As architectural rendering leader Lumion explains, “You can breathe life into your design by adding environment, materials, lighting, objects, foliage, and compelling effects.”

It’s fast, seamless, and transformative on many different levels.

Virtual reality (VR) technology still has a ways to go, but we’ve reached the point where consumers are able to get their hands on VR devices and use them for entertainment, as well as practical purposes. Were you aware that the majority of VR content is populated using 3D rendering and visualizations?

Whether we’re speaking of a 3D game in which the viewer walks through the streets of a crowded city or war zone, or a platform that enables you to tour an apartment building from the comfort of your living room, 3D rendering technology makes it possible to experience other worlds.

“3D is an effective marketing tool for new and upcoming projects,” architect Philip Oloo points out. “3D images are powerful in communicating future plans to investors. Top home builders use 3D rendering to sell homes before they are built, giving clients opportunity to change designs, colors, textures and size.”

Without 3D rendering, many projects might never happen, whether in building construction or physical objects. It’s the gasoline to the fire that allows ideas to come to life.

Have you ever played a free-play video game that has an enormously large map? (Games like Grand Theft Auto and Far Cry come to mind.) In these programs, the maps are often populated and refreshed using 3D rendering technology that breathes life into otherwise stale environments.

Without that, the maps would become predictable and monotonous. So the next time you play one of these games, try to imagine how much work went into it.

Adding it All Up

A world without 3D rendering technology would be dull and startlingly two-dimensional. From the process through which buildings are designed to the compelling graphics of your favorite video game, 3D rendering capabilities have transformed the way we consume media, convey ideas, and engage in entertainment … and we’ve probably reached only the tip of the iceberg!

5 Reasons to Buy an Isuzu Truck