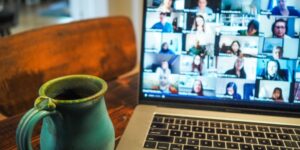 One of the big problems with conferencing tools, both those that focus on smaller groups like Microsoft Teams and for large audiences like On24, is making it so remote attendees are not disadvantaged. Huddle rooms, a new concept, instead of making things better post-pandemic appear to be making things worse because you still have the advantage of on-site attendees being able to have side conversations and grab a social meal or drinks after the meeting to catch up.

The drinks/dinner thing could be addressed via an approved online activity like a team-building game, but the loss of side conversations just has not been taken seriously enough. Well, until now. A service called Shindig, which is used by companies like SAP, Accenture, Salesforce, Blue Cross Blue Shield, and others, provides a unique capability that could help remote employees remain remote and further reduce the need for and related risk of air travel.

Let us talk about that this week.

The problem with video conferencing systems

I have covered this category since I worked on it in the late eighties on joint projects between IBM, AT&T, and Apple. The industry tends to go in cycles in which a bunch of companies jump on technology, people do not use it, the companies dump the product allowing the industry to consolidate around a few vendors who go into decline, and then the pattern repeats. It is quite annoying.

Each generational cycle allows technology to mature, but sadly, the expectations for this technology advance as well, which leaves a near-constant gap between the ideal of never having to travel or feel left out again and what these products can do. One of those recurring problems is side conversations during a presentation. If you are at the event, you can chat with others once the event breaks. If you are remote and want to chat, you will need to pick up the phone or use a conferencing tool, and that only works well once the meeting is over unless you want to try to have multiple services trying to use your microphone and camera at once.

What Shindig has done is create something it calls Watercoolr (I know, weird spelling, but this allows them to brand the name). It allows attendees to, with permission, chat with other attendees. In some ways, this is better than being at an event in person because you can chat with anyone there, including the speakers, privately and personally. Say you just want to comment on the talk or take something that was said and explore it. Shindig lets you do that, and the result could be more collaborative.

For instance, rather than public questions and answers which can take up a massive amount of time with a large audience, assigned spokespeople could queue up or dynamically volunteer to answer questions real-time, only pushing those of general interest (and with the appropriate level of controversy) to the general audience. This would both make the presentation more interesting, because the content could be made more dynamic based on the questions, and prevent the occasional disaster.

I recall a disaster that happened at an event in the late nineties. Novell had analysts and press at a huge event where it introduced a new platform called SuperNOS. An analyst asked a natural question which was, “isn’t what you are going to build the same thing that Microsoft is selling as Windows NT today?” That started a massive move from Novell to Microsoft which eventually killed the company. Had that question been handled privately the reporters might not have immediately picked up the question, giving the then Novell staff time to think of a better answer than the lack of one at the event. While it may not have saved Novell (the company had lost its way), it could have at least prevented the catastrophic outcome that effectively terminated the company.

After not traveling for two years, I dread traveling again and having to rebuild my previously decades-old frequent flier status. Thus, any tool that targets making remote attendance as good as or potentially better than attending in person, I am a fan.

Shindig, by nature, is not really a collaboration tool so much as it is one focused on big tent events with large audiences, making travel to those events not only redundant but, unless you want to do something else at the venue, unnecessary. When the company briefed me, it also shared some things on its roadmap which could continue to positively differentiate it in this regard now and into the future.

In a world of mostly copycat, large-scale conferencing products, Shindig stands out by finally addressing one of the most annoying problems historically with video conferencing: building and maintaining relationships.

Sheldon Xia: BitMart will become the Ecological Entrance to the Metaverse and Web3.0