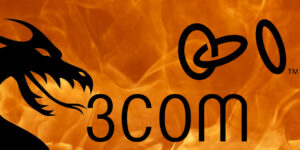 3Com was the hottest Silicon Valley startup of its time, a Dragon (a term that is rarely used referring to a company that not only makes back what a VC invested in it but so over performs it pays off the entire investment fund more than covering all the losses for the firms that failed).  The firm was foundational for the future because much of the initial technology that created our ability to wirelessly connect came from this amazing company. It even had a chance to become Apple before Apple did, it had the Palm Pilot and a group inside the firm created a prototype iPhone years before Apple released their device, but executive management didn’t believe there was a market for a consumer-oriented Smartphone.

Even a Dragon can fail, and 3Com largely failed because they lost their way and Cisco, doing a far better job of staying focused and recognizing that the way most firms like 3Com do mergers was brain dead stupid passed them like they were standing still.

An old coworker and friend of mine, Jeff Chase, just released a book on 3Com’s rise and fall and it is an excellent resource on Silicon Valley and Internet history.  Titled “3Com Story” it provides amazing insight into how the company that could not fail.

I think there were three mistakes that book points out which materially contributed to 3Com’s failure.  The first was using a merger process that was both common and badly flawed. The second was chasing Cisco rather than forcing Cisco to chase them.  And the Third was losing track of who they were and going after sparkly things (Palm). Let’s take each in turn.

If I were to point one huge difference between 3Com and Cisco it is that Cisco got that the process that is typically used to merge companies is brain dead stupid and a company killer.  This process tends to ignore culture, focuses on making the acquired company morph into something similar to the acquiring company, and pretty much destroys the value of the acquired firm in the process.

The right way to do this is to instead identify the assets that you bought the firm for, and then put protecting those assets (human, IP, company execution) ahead of any other priority for the merger.  So that rather then working to destroy the acquired company’s culture you assess and protect it because that “culture” is likely core to why the firm was attractive to you in the first place.

It reminds me a bit of why a lot of marriages fail, if the parties to respect and protect what attracted them to the other party in the first place and instead focus on changing them both parties likely be unhappy and the marriage will probably fail.

Learning from Cisco is one thing, trying to be Cisco was something else and 3Com tried to become Cisco.  Also, far from an uncommon mistake (recall that Research in Motion/Blackberry tried to be Apple and damn near went out of business) this too is a company killer.   This goes back to something that Thomas Watson Jr., IBM’s most successful CEO, once said. “Be willing to change everything but who you are”. 3Com needed to change but by trying to become Cisco they were trying to change “who” they were, and Cisco was undergoing change as well, so the firm was a moving target.

When I was in competitive analysis, we studied how the Japanese took leadership for the automotive market.  A core part of the effort was Ford and GM trying to build a better Toyota. But the companies took 5 years to dismantle and Toyota and build copies.  Those copies were the Pinto and the Vega, both very competitive with Toyotas from 5 years prior but not at all competitive with the cars that were in the market at that time.  Yahoo tried to be Google and they aren’t around anymore either.

If you’re always focused on the bumper of the car in front of you in a race, you’ll never win it.  Trying to be a be a better Apple than Apple, or a better Cisco than Cisco assures the other firm will always win and once the market recognizes that the firm you are chasing is defining your strategy customers will flock to the leader, why take the risk you aren’t a good follower?  And given you don’t know the other firm’s strategy until it is made public, you can’t articulate your own.

I saw this at Microsoft repeatedly when Steve Ballmer was running the firm.  First, he wanted a new iPod (Zune), then a new iPhone (Microsoft Phone even buying Nokia and killing the phone part of that firm).  There are a lot of fun and exciting new companies out there, they can be really distracting, but you need to keep track of what you are good at and then focus on that.

Chrysler damn near went under trying to build boats and planes.  Microsoft’s efforts on MP3 players and phones cost their CEO his job.  Sony tried to be Apple and damn near went under (which is kind of ironic given Sony was Steve Jobs’ model when he rebuilt Apple).   3Com simply lost track of what it was good at and started chasing too many sparkly things.

This lack of focus helped turn a Dragon into a roadkill.  I doubt that Apple’s move into the automotive market will end any better.  If firms want to invest in a different market create a standalone company by first creating a core of experts and then get them the hell away from the originating firm.  Focus is king in sports and in business, lose it and lose the game.

3Com was an amazing company, but it was broken through a number of really bad practices.  Three of them were a merger process that sucked, a loss of identity as it chased Cisco, and an inability to focus on its knitting and not chase sparkly things outside of its core expertise.  The “3Com Story” highlights all of this and more, it provides a good primer into the birth of the networked world we live in and great insights into what not to do if you want to succeed. Given 3Com’s problems are all very common I think this book is a must read for anyone not wanting to repeat that firm’s failure.   You can actually learn more from failure than from success. Put this book on your summer reading list.

9 Ways to Prevent a Migraine