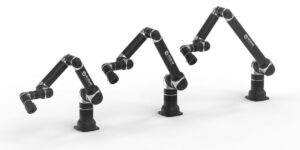 The mention of the term robots is closely associated with futuristic applications. When people envision robots, images of human-like machines that are able to mimic human intelligence as well as androids that are equipped with fictitious cutting-edge artificial intelligence by their creators come to mind. In the real world, robots are utilized in many applications, including being used to carry out repetitive tasks and functions that human beings would otherwise find tedious or too boring to perform.

As such, robots are found commonly in areas of manufacturing and other industries. Robot arms have a proven level of reliability and an impressive track record of handling jobs efficiently without the risks and challenges that are typically associated with human error.

What are some of the practical uses of robotic arms?

Practical robots are generally designed to take the form of mechanical arms. Mechanical robots are usually equipped with various elements such as arm-manipulator, high-torque servos, grippers, suction cups, and electromagnetic plates that all work in close association with conveyor belts to allow the efficient assembly of equipment in the manufacturing process.

Although they are primarily statutory, mechanical robot arms are endowed with several capabilities including varying degrees of freedom, which allows them to move freely in various directions and at multiple angles proficiently.

Robot arms are also designed to execute complex tasks and operations that call for extreme precision and accuracy that is beyond human abilities. When programmed correctly, robot arms can repeat tasks severally without performing any errors. With added proximity and pressure sensors, the accuracy that can be achieved by robot arms is remarkable, which means that they can be used to handle materials that break easily or those that need special care.

Robot arms are also frequently employed in scenarios that prove too risky for human beings to perform. For instance, in steel manufacturing factories, robot arms are utilized in the handling and transfer of materials, to load dangerous components such as iron ores into blast furnaces, which are all life-threatening tasks that can cause severe harm and damage when they are not done properly.

There are several types of robot arms that include:

1. Cartesian Robot: These have three joints that coincide with conventional X-Y-Z Cartesian axes.

3. Spherical or polar arm: These are equipped with fittings that give it full rotation in a globular range.

4. SCARA Robot: These robots are used frequently for picking and placing items.

5. Articulated Robots: These types of robot arms are incredibly flexible and are used commonly for multiple jobs such as drilling, welding, or soldering.

Within a couple of years, robotics components will be integrated in every part of our daily routine, from driverless cars to the robot-barista.

The most trending startups for 2019

AMD Hits A Home Run And People Line Up To Buy