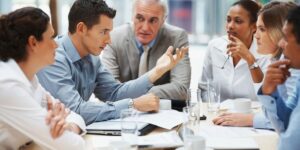 Pat Gelsinger, Intel’s CEO, this week spoke on several topics regarding Intel’s future.  But, as he was talking, I realized he was also demonstrating a rare skill, a superpower shared by only a few of us. That is the ability to talk about technology so that non-technical people can understand it.  This skill is rare with engineers in general and even rarer with CEOs, where it should be common.

Let’s talk about Pat Gelsinger’s ability to explain technology this week and why it is a critical, underappreciated, and underutilized skill this week.

Typically, there are two types of CEOs: intimate with the technology often because there are company founders. Those brought in to lead come from outside the industry and have turnaround or other needed business skills.  Satya Nadella, Jensen Haung, and Pat Gelsinger are examples of the former, and Tim Cook, Steve Ballmer, and Louis Gerstner are/were examples of the latter.

Ideally, a CEO should possess both skills, technical competence, and business acumen, but that often turns out not to be the case, so young companies hire business experts early on.  These experts then run the company while training the founders on the skills they lack.  Apple, Microsoft, and Google all came up this way.  Turn around efforts can have a similar process as IBM demonstrated with Louis Gerstner. The external business expert cleans things up and then sets up their successor for the sustaining job that follows.

However, the undervalued skill in both groups is the ability to talk about what the company builds and does in a fashion that a non-expert can understand.   As even technical CEOs advance, they lose track of the nuances in the technology and increasingly become unable to describe it, simply falling back on buzzwords. Their day-to-day duties take them farther and farther from the core skills that made them competent in their field initially.  Business managers generally never had a deep knowledge of the technology and tend to memorize buzz words and put them in sequence without understanding how the related technology works.

Regardless of the path, you generally end up with an executive who can’t simply explain what their company does or how it does it.  That is problematic because most reporters, stockholders, and customers aren’t experts in the presented or sold technology. They often won’t buy or speak favorably of something they don’t understand.

Being Able To Talk To Regular People

This preference for understanding makes it critical that an executive, particularly a CEO, talk about what their company does simply and accurately without talking down to their audience.  But what you often get instead is someone that is either so excited about the technology they can’t get out of the weeds or someone that doesn’t understand it and is trying to cover up that lack of understanding by stringing buzz words together into incomprehensible sentences.

Gelsinger, in contrast, speaks to his audience, not down to them, and presents what his company plans to do in easy-to-understand sentences and with clear examples.  You can see him in action here as he talks about Intel’s advancements in Process technology and related new naming schemes.

He is high energy, clearly excited, modulates his voice to draw interest and his content is easy to understand yet fully defines what Intel plans to do.  Oh, and he doesn’t monopolize the presentation either, passing parts off to executives closer to specific aspects of it.

This ability to explain is likely why he has effectively gained access to US funding for his manufacturing increases and why investment firms appear to be rating Intel higher since he has come to the office.

In short, Pat Gelsinger’s superpower is his ability to make complex sounds simple and showcase what is compelling behind the technology he is pitching, not just the technology itself.  The communication skills Pat showcased this week are a best practice and should be an example of how every CEO and customer-facing employee should learn to present what their company does.

Getting there isn’t easy because performing at this level requires a balance of technical, business, and communication skills few have initially, but everyone can learn over time.  I should add that often it is better to have someone with this skill present than someone else who is more senior but less capable of performing at this level.

If we had more CEOs like Pat, we’d have fewer companies in trouble, more successful startups, and greater sales overall in the related companies.

Gem thief convicted for swapping £4.2 million worth of diamonds with pebbles