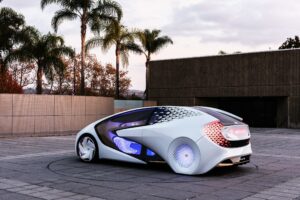 This week Bosch and Daimler announced they would be using NVIDIA’s Drive Pegasus platform to develop their autonomous car efforts. Buried in the announcement was also an indication that they were also developing a revolutionary cooling system for electric cars, and Germany (along with the EU) has plans to pivot to electric cars over the next decade. Not in the release but known is that Daimler has also been working with both WiTricity and Qualcomm to develop wireless charging. This could allow a future autonomous car to drive itself coast to coast.

Now, currently, most of us believe that the advent of autonomous cars will mean the death of personal car ownership. We’ll just subscribe to a CaaS (Cars as a Service) and we’ll never have to own one. But given these cars could now be anyplace we want them to be that may not be the outcome.

Let’s take a look at 2030 and an alternative view on what our automotive life could be like if we don’t do the Uber option.

Our Car When And Where We Need It

Let’s say you are flying a few hundred miles like I am to Vancouver in a couple of weeks. Now let’s set aside the boarder which could still be ugly, but by 2030 I should be able to send my car on its way to the destination airport 6 hours (how long the drive tales if I’m really slow) before I arrive. When I arrive, rather than a rental or an Uber, my own car picks me up at the airport with my luggage (which I didn’t have to check or carry on the plane) whisks me to my hotel, parks itself, and then waits to take me to where ever I need to be. In the car is all my stuff, spare clothing for emergencies (in case I need to dress for a dinner I didn’t know about), spare business cards, spare PC (in case mine breaks), heavy and light clothing in case the weather changes, and any spare medicine I might need.

And this is my car with all the stuff I ordered just for me, my color, my engine, my interior layout, my entertainment, my comfort preferences, and I don’t have to worry that it will “take me for a ride.” I expect this last could become a problem if someone hacked or cloned an Uber self-driving car.

In effect my car becomes an automated rolling suitcase that self-delivers itself anyplace in the country I want to go. While I doubt I’d send it across the country, with wireless charging (or some kind of charging national service) I could. And with a car like a Mercedes, BMW, Audi, Rolls Royce, or other luxury car I might want to because then I’d have all my entertainment, personal preferences, and stuff where ever I went.

The other nice thing is that if there is an air travel problem you can have your car drive you home and sleep in transit. I travel a lot and there have been several times when fog or weather has shut down an airport and I’ve needed to drive home instead typically with 2 or more folks, so you don’t fall asleep. But with a wireless charging electric autonomous car you can clime in the back, work, or sleep, and likely make it home overnight while still being relatively fresh for work or that first meeting in the morning.

This should create a sharp contrast between those that have their own luxury cars and those that use a car service. The car services will likely gravitate to cars specifically designed for them (kind of a future version of what was the ubiquitous Yellow Cab). Washable interiors, basic transportation, and a focus on low cost. But those that have their own cars will really stand out and, I expect, the car will even more aggressively showcase status perhaps better than it does today. The reason I say better, is today you typically park your car before walking to where you are going or leave it behind when you travel so most of the people you interact with don’t see what you drive.

So, you may have this impressive status car today but unless you have the equivalent of car baby pictures (which I do) you really don’t get the opportunity to impress your co-workers or contacts. But in the future your car will drop you at the front door of the building and travel to meet you at remote locations. I can even picture luxury brands offering unique services with a car like yours being offered at remote locations as part of a premium CaaS service. (Your car has a Go Bag, drives itself to the dealer, the dealer pulls the bag and ships it to another deal where you are going, that dealer puts the bag in a car like yours, and sends it to the airport to pick you up). At the right price I’d love that service.

As a result, more people could see and comment on your car which would strengthen status and make owning your own luxury car far more attractive than it is now rather than less.

Wrapping Up: Your Future Autonomous Car Could Be More Like A Well-Behaved Pet

Pets are also often about status and presentation and, if you think about it, a car that comes when called, meets you when you exit your house or a plane terminal, and is with you even more often than now might be considered a robotic pet. Kind of like a huge Aibo. Now if you factor in that these things are going to get Alexa like built in digital assistants which will likely use the supercomputers driving the cars, you can see you might get even more attached to them. I mean many of us name our cars now, just think how we’ll think of these things when we can converse with them.

In short, I think that my 2030 we may not only still be buying cars but many of us will be treating them more like pets that automobiles. “Here Chevy, who’s a good boy, you’re a good boy.” Granted, given these cars will be able to converse with each other I’d expect to see more than one car tell a peer that “my driver is an idiot, but then again he hand waxes me so I’m not complaining.”

Making the Most of Your Business Promotions

Casinos to target Japanese gamblers in Osaka, while UK brands have ‘bombarded’ the World Cup