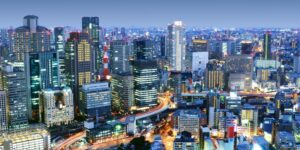 The Japan government has lifted the ban on casinos back in 2016 after a 15 years long debate and recently they have passed a bill to regulate the sector in response to claims that with their decision they will undoubtedly create a generation of gambling addicted.

Japan was once described as the ‘final frontier’ for casinos but things have now changed as the government has dropped the resistance and it will therefore gain billions of dollars in tax revenue. Many believe Japan now have the opportunity to rival Las Vegas and Macau as a magnet for foreign tourists that will now be able to gamble freely in cities like Osaka.

This move will create tens of thousands of jobs and push the economy of the different cities. Japan is growing in popularity as a tourist destination and it is not surprising to see that it has attracted the attention of top casino operators like Las Vegas Sands and MGM Resorts. Those two companies have already announced that they are planning to invest $10bn (£7.6bn) in a casino project based in Osaka.

It is not too surprising after all the Japan opened up their country to gambling: economists have estimated that the casino industry could bring in an income of around $18bn to $34bn a year of which 30% will go straight to national and local government in tax revenues.

The casinos are going to be built initially in 3 locations and should start in 2022: they will be part of ‘integrated resorts’ where tourists and locals will find hotels, conference rooms, restaurants, events, shops and so on.

The government presented the idea as something that will tackle organised crime: all the casino licenses that will be given will be carefully checked and everyone who submit false application will be charged with fines up to 500m yen.

But not everyone is happy with this new law as many believe gambling addiction will rise in the country as a result of casinos being freely allowed. Last year a government survey showed that around 3.2 million Japanese have in some time in their life been hooked in some sort of gambling activities.

In the law there is however a clear attempt in limiting the exposure of Japanese citizens to slot machines and poker tables as they will be charged to be admitted to casinos and visits will be restricted to 3 times a week or 10 times a month. Admission will be free for foreign tourists.

Mark Vighan, editorial chief of Casino Biggest Bonus and an expert in the economics of gambling said that lifting the casino ban to increase jobs and tax revenue is a good thing although more has to be done to ensure problem gambling will be tackled effectively as limiting admission might just not be enough.

A recent Japanese poll done by a local agency showed that 65% are against the casino legalisation and only 26% is in favour. But polemics around the world of gambling are not only in Japan. In the UK, newspaper The Guardian, has attached TV broadcasters who have exposed British World Cup viewers to around 90 minutes of betting advertising during the tournament. Children, claim The Guardian, have being bombarded with messages that were pushing them to gamble.

They have calculated that from the start to the tournament to England’s semi-final match against Croatia, ITV showed more than 8 and half hours of advertisements of which just under an hour and a half were to promote betting. So this was roughly one minute in every 6. To make things more impressive The Guardian has also calculated that bookmakers and online casino companies had one and a half times as much screen time as alcohol firms and around 4 times that of fast food shops.

GambleAware has also joined The Guardian in complaining about the current situation and has demanded a mandatory tax because they are not receiving enough funds to research and treat problem gamblers. Those have reached more than 400,000 in the UK with GambleAware that is currently funded via a voluntary levy on gambling firms of 0.1% of revenue.

There is a major piece of research that is currently being done by the University of Stirling and Ipsos Mori into the effect of gambling ads. Those were deregulated around 10 years ago and since then there hasn’t been any proves that they could cause harm to vulnerable people. The studies are due to be completed in 2019.

GambleAware chief executive Marc Etches said that young people are growing up with a strong affiliation between gambling and sport. There were nearly 30 million people watching England’s semi-final match against Croatia and ITV had to increase the cost of advertising because it did allow companies to reach so many people.

From what we have been able to find out a 30 second spot during the semi-final of the World Cup had a cost of £350,000 but bookmakers and online casinos did pay a premium to secure a blanket coverage.

The Guardian looked at more than 1,300 adverts that were shown around the World Cup competition. Of those 1 in eight commercials were about gambling products. If we do take away sponsored ads shown at the beginning and at the end of each break than betting accounted for 1 in 6 adverts shown during the World Cup.

The Advertising Standards Agency said that they are investigating 115 complains about World Cup gambling adverts against just 27 in the previous month. The regulator are looking into several adverts that have offered improved odds for a short period of time: those might well be in breach of the new advertising code of practice that has banned companies from making urgent calls to action.

It will be interesting to see how things will pan out. The World Cup is surely such a big event and it is paramount that children and vulnerable groups are kept protected. In the UK gambling companies cannot advertise on TV before 9am unless there is a live event being broadcasted. Was this enough? It is likely that we will have to wait for the result of the research in 2019 to find this out.

Your Pet Car:  How The Automotive World Will Change By 2030

6 Men’s Grooming Tips For A Clean And Pleasant Start