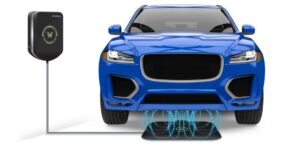 I drive a Jaguar I-Pace, Jaguar’s first electric car, and one of the most annoying parts of driving an electric car is charging it. Now, don’t get me wrong. With gas prices going up faster than Elon Musk’s ego, the fun of driving by gas stations and waving far exceeds the annoyance of charging in my garage or on the road, but it could be a ton easier.

WiTricity has been leading the charge to get rid of the charging cable and go to a wireless solution which could not only make charging at home less annoying it could allow you to charge while you are parked on the street or in a parking garage which has been problematic for owners of electric cars in cities.

The pain of charging

Most everything about driving an electric car is better than an ICE (Internal Combustion Engine) car except for two things: ranges and charging. My car will do 250 miles between charges, but my wife’s plug-in hybrid will go around 500 miles before needing to fill up with gas. In addition, on a long trip, I need to look for chargers, deal with jerks who park their F150s in charger spots, deal with broken chargers and charger cables, deal with the lack of consistency between charging station transactions, and the latest water-cooled cables, which are heavy and stiff, making plugging in the car on the road an exercise in aggravation.

You can use fast chargers, but they cook your battery which costs around $10K to replace, or you can use a slower, Level 2 charger and wait around 12 hours for the car to be completely charged.  Finally, even with fast charging, the car will only charge to around 80% before stepping down the charging rate to protect the battery. So, even with a fast charger, it is rare to get out of the charging station in less than an hour.

Finally, in winter, everything is not only icy cold to the touch, but the cables also get even stiffer and there is nothing like battling a charging cord while standing in a blizzard when you’re trying to get home to put you off electric cars.

WiTricity uses magnetic resonance charging which allows you to put the charging mat permanently on the floor or buried in it.  The charging speed is like with the Level 2 charger that you’d buy for your garage, so it is limited to 35-40 miles per hour. But it is hard-wired and attached to the ground and looks like a thick rubber mat with a cord sticking out of it.

If you put this in a carport, garage, parking garage, parking space, or in a drive-in movie theater (OK not many of those left but given the pandemic, I’m thinking maybe we should bring them back), you’ll have a decent charge when you next need your car.

The experience is that the dashboard display helps guide you over the pad and tells you when you are ready to charge, the financial transaction can be handled automatically or from the car’s internal screen (no more getting out in bad weather to plug the darn thing in), and once started, you can lock and leave your car to charge for however long it is there. No worry about someone trying to yank the cable out, no more standing out in freezing temps as you try to figure out why the charging station won’t take your credit card, and no more messing with the charging cable.  Oh, and no more getting into your car in the morning to find you’d forgotten to plug the electric car in.

This is the way electric cars should be.

Electric cars are superior to ICE cars in acceleration, climbing, traction, operating cost and sustainability. Where they lag is in power access and storage. The car’s massive battery is its Achilles heel in that it typically can’t hold long enough, takes a long time to charge, and makes up a high percentage of the electric car’s weight. But if you can build charging so that the car charges whenever it is parked much of this problem goes away. That is what WiTricity announced with Halo, a wireless charging solution that mitigates much of the annoyances of today’s battery technology and sets up for a time when a battery breakthrough could significantly improve the overall electric car experience.  Nice job WiTricity, and a big thanks to the CEO, my old friend Alex Gruzen for a job very well done!

Steps To Take After Sustaining Injuries At Workplace