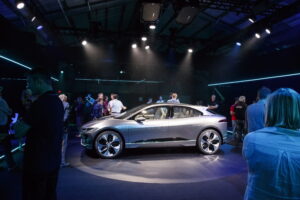 On Monday I was one of a small group of folks in LA and London who got to see the new I-Pace virtually and in person. This small SUV is exactly where Tesla wants to go in that it is a more affordable small SUV than the Tesla X with a nice blend of performance and practicality. But why I think Tesla may be screwed is that it better blends what we are used to in cars with the technology that comes in electrics. It is better looking, will likely be more reliable, and will certainly be more practical than their current Tesla X and their rumored, smaller, Tesla Y. In addition, while Tesla largely stands alone, this new Jaguar is coming to market backed and supported by both Intel and Dell. It promises to be a much stronger blend of mainstream technology and automotive concepts as a result.

Much like the creation of this car is largely the result of Tesla forcing the automotive market to move to electric, this car will likely force Tesla to take a harder look at design, practicality, and reliability as a result. The fact we can even talk about a Jaguar as a showcase for reliability showcases just how much Jaguar has changed over the last two decades.

What Tesla Doesn’t Get About Cars

I rented a Tesla X partially because I was thinking about buying one and after two days with that car I was no longer interested in it. It is supposed to be an SUV and someone at Tesla missed that SUV actually stands for Sport Utility Vehicle. Certainly, the car was quick but you’d never take it off road thanks to that massive windshield that costs an arm and a leg if it gets hit by a rock and the massive number of overly complex systems that would seem to fail quickly if you took the car off road. On the utility side the back seat doesn’t fold down so you really can’t use it like a mini-van (which is actually what SUVs mostly are, better looking and less embarrassing mini-vans). Ironically the Tesla S wasn’t like this at all, it was one of the best all-around, big sedans I’d ever driven but the X isn’t at all well designed as an SUV.

Part of the problem for me is that after the Fisker designed Tesla S or the earlier Lotus designed sports car, more recent Teslas got hit with an ugly stick. The X looks like the firm just gave up on attractive. The Tesla X remains the only electric vehicle that comes close to what a large SUV should be but it is more of a showcase of how much Tesla doesn’t get about trucks and SUV’s in particular.

Now what was interesting about the I-Pace is they even presented the car better than Tesla does using HTC VR Headsets backed by Dell Precision Workstations which gave us a far deeper look into the car than the typical car pitch. Frankly I was amazed at how good this car looked, much like if you took a Jaguar F-Type, one of the most beautiful cars in the road, and mated it with a McLaren while pushing towards a Porsche Macan in terms of size and appearance. It reminded me a lot of the first FX-35 from Infiniti which was almost identical to prototype that preceded it (I have one of these too). This was a car meant to foster lust in those that saw it and it certainly fostered lust in me. Lots of displays like the Tesla and it even had the same problem that the back seats didn’t fold down but that is the difference between Jaguar and Tesla, while Tesla kept those pointless seats Jaguar will lose them in the final build because they know that the “U” in SUV stands for Utility.

This is Jaguar’s second SUV but they are tied to Range Rover who is one of the oldest off road vehicle makers in the world and the F-Pace isn’t bad for a first shot. But Jaguar is a performance brand and thus the specs of the car are in line with both the Porsche Macan and Mercedes GLA-45 AMG (which I also own). With 400 HP and a 0-60 which should be faster than 4 seconds in final form. I say “should be faster” because electrics have all their torque at the start making them very quick 0-60, and almost frighteningly quick 0-30.

The Jaguar is not only uses more advanced batteries than Tesla does, developed with LG electronics, it uses water cooling which those of us that game, or do large enterprise systems, know is far more effective for moving heat than air cooling. Thus, it gets a working radiator which doesn’t make the front of the car look like someone forgot something.

The only sad thing for me is while the car will get advanced dynamic LED lighting it won’t get the wicked rain and snow penetrating system that they are working with Intel on. That is held back till 20-20. I’ve seen this and even in heavy rain and snow, when you turn it on, it literally is like Moses waved and parted the seas. It is about as close to magic as I’ve ever seen in technology.

One of the coolest parts of this launch was the effective use of VR technology which allows you to play around with the car even though you aren’t really allowed in the prototype. This was created with Dell and HTC’s help as both a technology showcase and a trial for what will be going into dealerships shortly. Jaguar isn’t the only firm doing this either as Audi, working with NVIDIA, has been showcasing VR as a dealership showcase for some time but Jaguar went further. They went from just showing the car to giving more of an interactive themed movie about it. I expect that, if you have an HTC Vive, eventually you’ll be able to do stuff like this from your home and maybe buy a real car after doing a test drive in the virtual world.

In any case check out the car and realize the future that Tesla and firms like Dell and NVIDIA helped start is coming, it now is just a question whether Tesla will or someone like Jaguar will be the bigger eventual beneficiary.

How to Make a Living through Online Blogging

Grad All Over – How Degrees Can Make You Rich