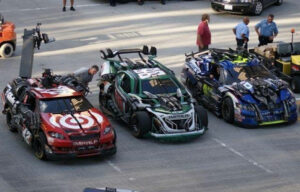 Roborace is an interesting idea but it has one huge problem. After you’ve seen the robotic cars race do you really need to see them race again? No drivers to get invested in, they have no real connection to the car you drive, so why would it be any different than watching someone’s electric train set? It if fun once or twice but unless you are the person running the thing there isn’t much more interest than watching hot wheels cars race. Once you take the people out of the race you also take a lot of the interest in the race out. Even crashes, which might put back in interest, will likely be avoided because they would reflect badly on the self-driving technology being used.

On this last there is a risk of bad perceptions coming out of the effort as well. You see unlike normal autonomous cars which are all going to different destinations robotic racers are all going to the same destination at the same time and instead of prioritizing safety they prioritize speed.

There are three ways I’d modify this race to make it interesting and far more lasting.

The most obvious is to allow the AI driven cars to race human driven cars. You’d want to match weight and performance so that what you are really showcasing is man against machine and not some other variable but up till machines started winning repeatedly and decisively this would be an interesting series to watch and you could even have the human drivers operate their cars remotely (as Drones) for safety and to push the limits of performance.

Now this would give you basically two cars which wouldn’t be that interesting and if you had half robot cars and half people you’d lose a lot of the drama. But what if, rather than a typical race, you ran the robot vs. human race more like the old women’s Roller Derby where some of the cars are defensively trying to take out the competitions cars while others are more focused on winning. This introduces the concept of a Jammer, one car in each team that is solely focused on speed and the rest of the team, with one exception, are blockers focusing on either helping their Jammer or hurting the other team’s Jammer. This then offsets the robots’ superior reactions with collective strategy which, at least initially, the human team would be better at.

You now basically a motorsport with team strategy and contact. More like Football than track and field and suddenly things would get interesting.

The Death Race movies were fun to watch but real machine guns would be problematic if you wanted to both have a cheering audience locally and not destroy extremely expensive cars in every race. But you could combine AR with the race and use electronic weapons and sensors along with speakers to emulate weapons and damage. You could even use weapons like lasers on offence and turn off traction control to emulate an oil slick while maintaining enough control to avoid running into a wall or other cars. You’d need AR or VR glasses to make this work at the track and decent wireless connectivity but given firms like NVIDIA and Qualcomm tend to sponsor these things and sell the technology that would be needed, this would not only make the race more interesting to watch but be a better promotion from the technologies that the race sponsors sell.

They give the Robotic cars personalities. I think people might show up to watch Apple’s Siri, Microsoft’s Cortana, Amazon’s Alexa, and Google’s nameless AI (they really need to name their AI) race. The related firm would be motivated to sponsor and the car would take on some of the personality aspects of the AI (aggressiveness, strategy, agility) that are connected uniquely to the AI. You could have VR press conferences and race against the AIs on your favorite gaming system at home to see how you’d do. Folks that did well with the games would have a chance to be immortalized with an AI based on how they raced with their name on it.

Over time you’d have immortal racers who could be brought in for special events or races making the effort generational and the once human racers immortal.

I think watching robotic cars run around a regular race track will get boring quickly because there is little engagement and no real drama. But if you could pitch human drivers against the robots, add weapons, or give the robotic cars personalities you could make the race far more interesting and engaging. And, while I said, “or”, what would likely really be cool is exchange that for “and”. Now you have a Roller Derby like car race with advanced cars, weapons, and robotic celebrities that can be challenged inside of video games and be eventually based on real gamers. Oh, and who says all of the vehicles have to be cars, maybe a flying drone or two to add a touch more excitement.

Now that is something I’d want a season pass for. How about you?

OCF Certification: What It Is and Why It Matters

4 Ways to Speed Up Your eCommerce Store