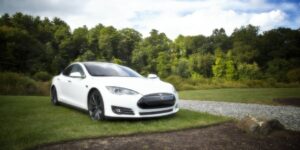 Simply talk to any gadget geek the day Apple launches a new iPhone and it’s not hard to imagine why so many techies are expanding their electronics budget into one of the biggest purchases any household can make: their car. Tesla has seized the imagination of technology lovers, entrepreneurs, the environmentally-conscious, and those drivers who live for speed. It’s not hard to see why this car manufacturer became the darling of the tech world; it’s like an iPad on wheels and with the launch of Model 3, you won’t have to work in Silicon Valley to afford one.

Tesla’s rise has been nothing short of meteoric, as it is now the highest valued car manufacturer in the United States, while its luxury sedan, the Model S, has quickly outstripped traditional competitors like Mercedes-Benz, Lexus, and BMW as the bestseller in that class.

While its origins stretch back to 2003, when the Silicon Valley company launched and began to develop early electric cars that offered zero emissions and incredible torque, its success story begins with Elon Musk becoming the company’s CEO in 2008. That year, the company launched the Roadster, an electric sports car whose acceleration speed put the car on drivers’ radar.

However, it wasn’t until the Model S launched that Tesla offered drivers a real alternative to traditional automotive companies in the luxury sector. Not only was it fast, with the “Ludicrous Mode” upgrade reaching hypercar accelerations, it offered luxury interiors and a range that made it a practical commuter vehicle. Today, it’s the top-selling luxury sedan and no manufacturer even comes close to competing with it in sales. They also entered the SUV market in 2015 with the Model X, appealing to families with more to haul.

The next piece to the Tesla puzzle came with the problem of infrastructure – Tesla needed places for people to charge their cars beyond their homes. They need to become as ubiquitous as gas stations are today before the Model 3 and other electric cars can change the way the majority of people drive. While you can charge an electric car at any ordinary wall outlet, Tesla’s Superchargers complete the job in as little as half an hour, and expanding their presence along highways is a big part of their plan to reach mass marketization.

Finally, there’s the mass market entrance of the Tesla Model 3, which has already seen over 400,000 preorders, meaning it will quickly transform highways and parking lots across the country. As long as the Model 3 is a success, Tesla will have succeeded in its goal of changing the automotive industry for good. Priced at $35,000 new, the Tesla Model 3 delivers clean transportation and connected driving at an affordable price. “Used Tesla for sale” searches can also turn up the high-speed Model S at a more affordable price. For the tech-obsessed driver, there is no looking back from Tesla; it only remains to be seen what new rivals emerge from within Silicon Valley.

Taking on Detroit and the biggest international car companies is no easy task, but Tesla has so far put up a challenge. With an aggressive growth plan, despite delays in the launch of the Model 3, its mass market entry and infrastructure expansion mean the company is the biggest threat to Detroit in a century.

4 Easy Ways to Stick to Your Small Business’ Budget