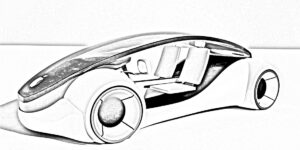 Wow, 2016 has sure been a crazy year so far. When thinking back on the year, you may just be thinking about many of the not-so-good things that have happened. But let’s take a second to reflect on all of the crazy and insane technological advances we’ve made this year.

We can print basically anything in 3D now. Renewable energy is quickly becoming the energy of choice for many countries. You can visit Mt. Everest from your living room with a pair of VR goggles. And maybe the most insane of all…

We have self-driving cars.

A couple of years ago, anyone with a brain would have laughed at the thought of self-driving cars picking up speed (literally) in the year 2016. But here we are. Whether it’s Tesla or Uber, self-driving cars will soon make our cars now seem like horses and buggies. And it’s not just the United States either. Australia just got its first self-driving car on the road in October!

And sure, that’s a little uneasy for some people. It’s a pretty foreign concept that seems incredibly dangerous and uncertain at first. But there’s really not much to worry about when it comes to self-driving cars. Below are some of the top reasons why you should embrace the self-driving car movement.

1. Self-driving cars can make our roads a lot safer.

Think about it. What do you think is safer? Driving a supercharged muscle car super-fast down a highway with a person in control, or having a self-driving car doing all of the calculations for you?

You may be surprised, but having a self-driving car is probably a whole lot safer. In Australia, for example, a study found that 13.5% of car crashes involved intoxicated drivers, 11.8% involved drivers falling asleep, and 10.9% involved drivers being too fatigued to drive safely.

When you have a self-driving car, these crashes are far more likely to be avoided.

2. Productivity could get a little boost.

Ok, this one may be a little in the future when cars are completely self-driving, but when you’re in a car that’s safely driving itself, you have some extra time to get work done.

Overslept a little bit and need to send some emails before you get into the office? Send them while your car is driving you to work. Or maybe you just want to check your social media feeds before that big event in the evening. A self-driving car can make our commutes more productive.

3. Self-driving cars can put some money back in your wallet.

Thanks to less accidents, you’ll be less likely to see hikes in your insurance premiums. Self-driving cars won’t be slamming on the brakes or putting the pedal to the metal either, saving you some costly repairs down the road. It might not be a ton of money, but a self-driving car is sure to pay itself off in no-time.

4. Efficiency will be the name of the game.

This one goes without saying. Self-driving cars will make our roads much more efficient. No more toying around with the GPS trying to find the best route. No more getting on the highway, only to realize there’s a huge crash or construction that’s causing delays.

You’re self-driving car will be able to find the best route to take and get you to your destination as fast as humanly (or computerly) possible.

5. The Earth will be happy.

For climate change, self-driving cars could be a breath of fresh air. Even if they’re not electric (which they might all well be), because of the increased efficiency of a self-driving car, its fuel economy will be much better and there will be less carbon emissions to deal with.

With tons of benefits for safety and the environment, you surely have nothing to worry about with this new movement.