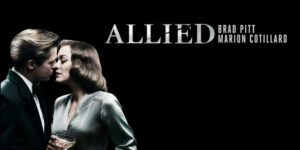 There was a lot of buzz around Allied as speculations went loud that it was the cause of Brangelina’s breakup, that might have attracted a few movie goers but I don’t think it added any value to the movie.

First of all the facts. We have the director, Robert Zemeckis, best known for Back to the Future and Forrest Gump. The star, Brad Pitt, who hardly needs an introduction. And Marion Cottilard, who has impressed in a couple of good English language movies like Inception, The Dark Knight Rises and A Good Year to name a few. There are a few other famous names among the cast, you could call them supporting actors if there was anything to support.

In 1942, an intelligence officer in North Africa encounters a female French Resistance fighter on a deadly mission behind enemy lines. When they reunite in London, their relationship is tested by the pressures of war.

If you watch the trailer then you might get the impression that there is much more to the movie than the simple plot of spy love spy, spy is enemy agent but spy still loves spy. Unfortunately there are no surprises, no unexpected twists in the plot or any “things are not what they seem to be”s.

The producers and the director were very honest, and decided not to deceive the audience. You can be sure that everything will happen as expected, the plot and the outcome are crystal clear and the actors seem to be trying very hard not to disappoint with any self-improvised show of emotions.

After watching the movie I took a look at what the professional critics had written about the film (I never do it before). There were a few that sounded something like a compliment

Allied is a fascinating and novel experiment, sophisticated in a different way: Zemeckis uses technology to elicit the feeling we get when we watch old favorites.

And the ratings aren’t so bad either

But Peter Travers from Rolling Stones reflects my thoughts the best

Robert Zemeckis’ old-fashioned tale of spies, sex and intrigue tries to be this generation’s ‘Casablanca’ – and misses by a mile.

What a handsome empty shell of a movie Allied is. Despite the star power of Brad Pitt and Marion Cotillard – and the rumors swirling about them off camera – their scenes together fail to ignite even a glimmer of a spark.

All in all the movie was a disappointment, Brad Pitt disappointent (unless you are willing to pay for a glimpse of his nacked ass), Marion Cotillard disappointed (unless you love listening to someone read you the yellow pages with a French accent) and the director, Robert Zemeckis, did not live up to his reputation.

If you have nothing better to do on a cold and rainy afternoon then go and watch the movie, it is better than getting wet in the rain.

The Advantages and Drawbacks of Purchasing a Vintage Car

Five Reasons Self-Driving Cars Are Nothing to Worry About