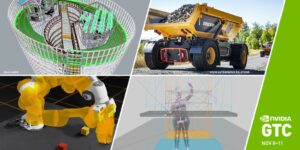 While next week’s big event, NVIDIA’s GTC (GPU Technology Conference), will provide a deep foundation for anyone wanting to learn about the now far more topical Metaverse, the most exciting segment for me is the automotive segment.  Cars will be changing a lot, both by going electric and by learning to drive themselves.  The Metaverse plays a huge role here because, using NVIDIA’s Omniverse platform, these ever smarter and more capable vehicles are trained in a digital twin of the real world.

Let’s talk about what to look forward to at GTC next week and why you might want to carve out some time to check out this free event. GTC starts on November 8th and will first feature the DRIVE Developer Day for anyone working on creating autonomous vehicles. Then you’ll want to see Jensen Huang’s keynote on the 9th first thing in the morning.

There will be 40 automotive sessions, but there are three that are the most interesting for me.

The first automotive session is with Guillaume Binet, VP of Software Infrastructure at Motional, and it will begin at 12:30 PST on the 9th. He’ll talk about Motional’s journey to a fully driverless cab.  For most of us, driverless cabs will be our first experience with autonomous cars that will eventually replace services like Uber, which currently uses human drivers. These mostly electric automated people movers should ensure, at least initially, a decrease in the issues (distracted driving, driving under the influence, poor personal hygiene, etc.) we’ve had with human-driven cars during the pandemic.

These vehicles will mostly drive on local streets and work a lot like horizontal elevators. You’ll bring up an app, call for a car, the closest in that service will be routed to you, and, once it arrives, you are off to your next destination.  The lack of a driver should open up the interior and allow for some unique designs that should be far more comfortable at any given size than a human-driven one. At GTC, expect to hear how close we are to deploying this solution, likely initial use cases, and why the emerging services will eventually be better, faster, and cheaper than the human-driven alternatives.

The next session starts at 1 PM PST on November 9th and will cover autonomous trucks.  These vehicles have been fast-tracked given we are short over 100K semi-truck drivers in the U.S. and Canada, and it appears the only way to close that gap meaningfully is to automate semi-trucks.  While the deployment of these trucks at scale remains a few years out, this may be one of the few sustainable ways we can meaningfully address the land transportation staff shortages.

Expect this session to cover the difficulties of rolling this solution out, the clear substantial benefits (including fuel savings), mitigating the driver shortage, increased safety, and driver retention.  We likely won’t be losing drivers near-term because of theft concerns (uncrewed trucks could be forced off the road and robbed), but one driver should cover more trucks and do other things while the truck is en route, given it will mostly be driving.

For drivers, the result would be more personal time, the ability to enjoy entertainment or catch up on paperwork en route, and maybe even sleep on long-haul routes.  And all of that comes with increased safety and reduced risk to the driver and the load.

This one is at 4 AM PST on November 10th, and I’ll likely watch it on delay because I won’t be up at that hour.  Simulations aren’t just being created to train automotive AIs; they will also be used for digital test drives allowing prospective buyers to experience the car they are interested in more deeply before buying it.   This session will discuss the blending of digital twins via NVIDIA’s Omniverse offering and how this technology will change car ownership and the car buying experience. Omniverse is also being used to train robots, and it remains one of the most interesting holodeck-like services.  The use of virtual reality in general and Omniverse to train the growing number of autonomous solutions is a game-changer. This session will demonstrate how far this technology has come and how critical it is to the automotive industry.

Those are the three sessions that intrigue me the most. Other talks will look at things like Drive Hyperion for developing autonomous vehicles, scale ML Ops for AV development, overcome AV challenges with 4D imaging radar, and cloud strategies to accelerate AV development.  This list is by no means exhaustive — you can drill down more deeply on the technology in even more sessions. I think you’ll be amazed at how far they have come in the last decade to get cars and trucks to drive themselves.

Suppose you want to see how the coming wave of autonomous machines and especially autonomous vehicles is evolving. In that case, the autonomous vehicle sessions at GTC should provide the ideal opportunity to see the state of this industry.  You can register here for free.

We are getting ever closer to the day when our cars will drive us, not the other way around. I only question whether they’ll have autonomous flying cars at the event (they are coming, too); we’ll see next week.

Chinese Version of Fortnite is Shutting Down in November