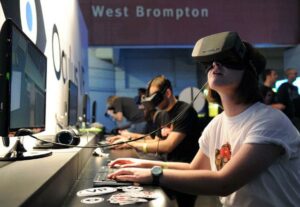 One of the really interesting things that Qualcomm showcased at their Technology Summit in Hawaii this week is their XR2 Extended Reality Platform for 5G.  This is their new premium platform for Extended Reality and it is intended to bridge the gap between AR and VR creating a head-mounted solution that potentially can do both when connected to a pair of glasses based on a reference glasses design Qualcomm is expected to release in a few months.

Now they showcased the potential for this offering and that they seem to grasp what needs to be done let’s set the bar to see if they actually do it because this segment has, so far, been struggling to move out of niche markets like manufacturing and repair and into a general market solution.   The XR2 Part is between 2x and 11x, depending on specification (AI is 11x better, CPU/GPU is 2x better for instance) and that per

This is perhaps one of the biggest issues that need to be addressed.  Right now, people go through a great deal of expense to avoid wearing glasses from contact lenses to eye operations.  You would think these solutions would initially embrace those that wear glasses and improve their glasses experience, but they don’t generally not only have to wear the head-mounted display but wear your contact lenses or glasses in addition to it.  The best solutions allow you to have prescription lenses, but they still don’t enhance the glasses experience by providing better sight like the ability to shift between a distance view and a close-up view (smart bifocals) and better night vision. Both are possible, but they have yet to be implemented as a core feature. If you at least embrace the current glasses wearers and make that experience better you have a ready audience for the product and then you can layer on the XR features more easily because the user is already happy with just being able to see better.

Now it is interesting that Qualcomm did showcase a potential included feature of improving your ability to hear sounds.  The demonstration was alerting to the sound of a baby crying while playing a game but why not an alert while you were just wearing the glasses when the glasses hear a fire alarm, the user’s name called, or sounds related to a break-in?   For someone that is hearing impaired or a normal person where they are either listening to music or the sound is too faint for them to hear naturally this could be a lifesaver.

If you could provide a sound and visual experience that either addressed problems with those that had impaired vision or those that had impaired hearing you get a base level of users as a foundation and if you can significantly enhance the vision and hearing of people that aren’t impaired you have a strong reason to buy the solution even if the user isn’t impaired.   This could turn the glasses from a disadvantage into an advantage if it was coupled with an effort to make the resulting glasses a positive status symbol rather than a negative one.

One of the big problems with Extended Reality is the lightest glasses don’t occlude the real image thus degrading the experience because the rendered image is translucent.  Now if you are walking while watching a movie you will likely be OK with this translucence otherwise, you’ll hurt yourself but otherwise, you want the rendered image to occlude what sits behind it.  This is particularly critical for Extended Reality games where you want emersion. If reality intrudes it degrades the gaming experience but if you can selectively occlude reality you can transform obstacles visually and more successfully overlay the rendered world, item by item, over the real world allowing a safe way to transform your physical world into an imaginary one and take AR games like Pokémon Go into a far more immersive experience.

Qualcomm implied they may have this sorted but until we can try the glasses, I can’t be sure.

One of the constantly ignored problems with Extended Reality is that people just don’t like wearing glasses.  This is largely why 3D failed in both movies and TV, people just didn’t like wearing glasses. If this is to truly take off the industry needs to develop a plan to change glasses-wearing from a negative into a positive.  Simply creating more effective active dark glasses could move this bar but with the technology applied we should be able to create Extended Reality glasses that significantly enhance our ability to see and hear natural things and thus turning a disadvantage into an advantage.  The other under executed feature is occlusion so that a rendered item looks real.

Qualcomm also showed the use of avatars for Extended Reality conferencing using Spatial, but they looked like unhealthy ghosts.  Being able to render photorealistic images would make a huge difference here and while you could offload some of the processing to get there it is likely the increased latency would create another problem regarding conversation timing.  The effort did show potential, but I wonder if a blended solution where the local devices were enhanced with central processing to make the experience far more realistic.

Qualcomm has made some impressive advancements and we’ll see how close to creating a set of glasses people will want to wear, an image quality with occlusion that truly blends the rendered with the real, and a quality of experience that will transform how we interreact with each other and the world.  This is a journey; Qualcomm has made impressive advancements, but the bar is incredibly high. Getting to that bar may take a few more years.

Tips On How To Improve Your Wix Site SEO