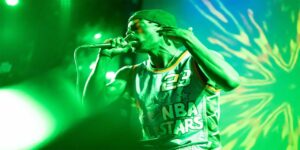 Brooklyn rapper, Tré Young, began making music while attending Kingsborough Community College as a promising track star but was soon booted from the track team for smoking weed, a vice he remains unapologetic about. Rather than sulk, Yung saw the dismissal as a call-to-action to dive into writing, recording and touring. He linked up with producer, Llama, who’d previously worked with Grammy-nominated artists Ryan Leslie and Fetty Wap, and released his debut album, Parkside Prospect in 2017. The album produced the cult hit, Now A Days and led to a worldwide tour.

Tré Yung’s latest album, Dark ‘N’ Sharp (A2iCreative), released in June 2019, features 16 tracks that speak to Yung’s eclectic musical inspirations, which go beyond hip-hop culture. Yung’s bold language and inflection, and his fearless use of beats pull from genres that transcend rap. “I make feel-good music, and I’m not stuck in any one particular sound. I’ve gained inspiration from artists like Drake, Jay Z, Future and Biggie; but I’ve also drawn inspiration from artists like Andre 3000, Good Charlotte, All American Rejects and Lincoln Park. That diversity comes through my music.”

The album’s standout singles are Coastin’, Waistlne, Sire and Spotlight. Coastin’ is a vibe-filled song with smooth bars over a currency iso sounding beat. Artist Kallyba, featured on the second verse, adds an interesting twist with a dancehall/reggae-inspired verse over airy guitars and smooth pianos. Sire is a radio-friendly track with simple keys and strings over catchy, bounce-filled lyrics. Waistline offers up a Caribbean Afro beat-inspired dance hall sound. Spotlight features frequent collaborator, High Grades Spot Light, and serves as a smooth, classic older sample-based song with blues-like vocals that make for a nostalgic single that rounds out the album.

If you’re looking for a consistent sound with similar beats throughout each track, this album is not that. Dark ‘N’ Sharp takes you on a divergent ride with hints of several musical genres and a unique use of samples that give Tré Yung’s music a distinct sound.

The Flatbush rapper puts an iconic New York stamp on his music. “I feel like each borough has their own style, but it’s all still cut from that same New York cloth,” he says. “New York is a melting pot and there are people from so many walks of life who claim New York and put out music, but the lyrics in my songs give away that I’m a New York artist.”

Tré Yung is paying more than lip service to Flatbush, Brooklyn. For every thousand streams of Yung’s album, Dark ‘N’ Sharp, Yung is donating $5.00 to CHiPS, a Brooklyn-based non-profit organization close to his heart, that is helping to provide food and shelter to homeless single mothers and their children.

Yung recently celebrated fifty thousand streams of his Dark ‘N’ Sharp album by presenting a check to CHiPS (Community Help in Park Slope) in time for the holiday season.

Tré Yung’s album, Dark ‘N’ Sharp is available through iTunes and on all major music streaming services. Visit https://www.treyung.com/. For every 1,000 streams of the album funds will continue to be donated to CHiPS, serving New York City homeless mothers and children.

Next Step In Extended Reality: Looking At The Qualcomm XR2 5G Platform

How Home Healthcare Improves Patient Quality of Life and Longevity