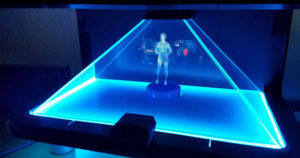 This week was Microsoft Build, thank god for their well-done live stream as I wasn’t able to attend, which is arguably the most fun you’ll have at a Microsoft event. This is where they typically showcase the stuff that is more visceral, that you might develop technology lust for, and where you engage both the creative and playful side of your nature. Build, when done right, is more like a big toy show than anything else and this year’s build didn’t disappoint. However, the most interesting thing this week wasn’t something Microsoft itself showcased but what a developer named Jarem Archer put up on his blog and it is spreading like wildfire. It is a Cortana personal assistant implementation that is as it should have always been a freestanding Hologram of Cortana as she appeared in the game Halo Reach where she was initially born.

We are clearly on a road to a future where it will be increasingly hard to tell the difference between what is real and what is rendered. While Hololens was at the start of this journey for Microsoft and the first truly industrial instance of a mixed reality solution it was only at the beginning and this week’s Build reflected a move to take many of these concepts, tools, and technologies more into the mainstream.

Granted the implementations were more VR in most cases than Mixed Reality, the difference being that VR places you entirely in a virtual world while Mixed Reality blends the real and the virtual into a seamless whole, it still represented a far more affordable path for those getting started.

Hardware showcased was improved headsets, controllers (this one is really cool), development tools and improvements in Windows with the latest edition of the latter called the “Fall Creators Update”. An example of one of these improvements is “Story Remix” which takes the place of the Albums feature in the current version of Windows 10. Not only will this allow you to better blend your videos and pictures into something you can share that is more interesting you’ll be able to add 3D virtual objects to the result creating rudimentary mixed reality films. You could create, for instance, a video of the front of your house with one of the Game of Thrones baby dragons playing on the driveway for instance.

Granted this kind of effort would be enhanced by the new Microsoft Studio all-in-one that was launched earlier showcasing a near linier connection between the hardware and software tools being created to help define the near-term future.

While this is still short of the goal of eventually providing you with your own artificially intelligent AI Dragon to play with, it is one of the necessary steps to getting there.

Some of the more interesting Windows 10 updated features in this release aren’t VR, one is Timeline. Basically, it shows a timeline, (there is an idea, a feature name that actually says what the feature does!), of the applications you’ve opened. I wish my phone had that, it would save a ton of searching given I have a ton of apps on my phone now. Speaking of phones if you install Cortana on your Android or iOS device you’ll be able to maintain state with your PC. Assuming the app is supported, you can pick up exactly where you left off on your PC with your Smartphone. Oh, and iTunes, you’ll be able to get iTunes in the Windows store so you can now, finally, use your far better (and bigger) PC speakers to play your iTunes tracks (I’m pretty sure hell froze over this year for several reasons).

Speaking of Hell Freezing over this new version of Windows adds Ubuntu’s Bash shell to the operating system and, just for jollies, they added SUSE and Fedora Linux support to this. (This would make a ton more sense if this was April 1st).

OneDrive gets offline folders so you can access OneDrive when you can’t connect, oh this is for Android folks using Office 365 (iOS support is coming). Back to Cortana they announced the Cortana Skills Kit as a public preview for developers wanted to create stuff for the raft of Cortana powered personal assistants that were announced by Harman Kardin (Invoke), HP, and Intel.

But, as I mentioned at the start, the coolest thing that was announced was this fully rendered holographic glasses/headset free Cortana. Can you imagine having your Amazon Echo or Google Home friends over for dinner and having your digital assistant render in 3D space as seeming attractive Cyborg woman (almost identical to what was in in the Halo game) and respond to your every command? The wow factor for this is off the chat and were it on the market for anything close to a reasonable price my wallet would have jumped out of my pocked, my credit card out of my wallet, and my finger would have been hitting the “buy” button as fast I could possibly move it. Watch the video, if you don’t immediately want this, you need to return your Geek membership card and never watch “Big Bang Theory” ever again.

Wrapping Up: Just The Tip Of The Iceberg

What I’ve covered is just the tip of the iceberg for what was covered at build. For instance, improvements to Visual Studio were showcased and impressive, and the Fluid Design System (demo here) they showcased for developers was stunning. But the thing that really got me to sit up was this idea of a real rendered Cortana I could chat with. If they ever make this thing I am totally screwed.

Overall, we are clearly moving rapidly into a world where what is rendered and what is physical and real will increasingly be mixed together until we reach a point where we can’t tell the difference and what we’ve always thought of as magic will appear real. While this journey is crazy scary I can hardly wait to get, there suggesting my own geek status is rock solid for now.

The Evolution of Gaming over the Last 10 Years and What’s the Future?

Exclusive Tips on How You Can Raise a Family Successfully