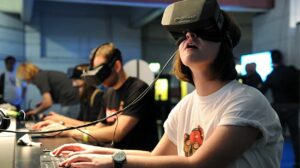 Since its inception in the 1950s at a science fair, gaming has evolved over the years to become the most lucrative entertainment industries in the world. While several technologies have played key roles in making it profitable, the mobile technology boom has completely transformed the industry and opened it to a whole new generation of gamers.

Undeniably, the gaming industry has become integrated in a contemporary culture that several people have considered buying a console or a gaming monitor. In “The Evolution of Gaming over the Last 10 Years and what’s the Future?”, we walk you through the developments of the gaming industry in the past 10 years and the future trends. Dive in with me.

Ever since the internet capabilities began to explode and computing power began to improve, we have witnessed an exponential growth in consoles and graphic-oriented games. But none of the technologies has had a tremendous impact on the growth of gaming industry as the mobile technology boom.

Since the emergence of smartphones and app stores in 2007, the gaming industry has undergone a complete transformation in not only ways people play games but also brought the gaming industry to the mainstream contemporary culture. Just as the early gaming enthusiasts joined niche forums, todays gamers have rallied around mobile gaming and the ubiquitous internet with social media becoming full of annotations about new games and gossip.

A handful of companies hitherto dominated the gaming industry. However, in the past ten years, companies such as Apple and Google have been slipping their way up from the sale of games in the app stores. Today, you can quickly develop any game in a hassle-free manner and enhance it with Google’s New Daydream VR Platform.

In particular, the Google Play Games allowed developers to integrate all the above-mentioned features into their games without beginning from scratch.

Apple entered the gaming industry with Apple Bandai Pippin which was a multimedia player, home video game console that enabled developers to create inexpensive computer games. Today, Apple has a Game Center that is essentially Apple’s stab at online social networks. Games on iOS, Mac OS, watchOS, and tvOS can now take advantage of the Apple’s Game Center to be launched. It allows users to track their latest scores on the leaderboard in addition to inviting friends and starting a multiplayer game through automatic matching.

The shift to mobile gaming has redefined the chapter of the gaming industry. While this move is suited for the busy lifestyles of millennials, mobile gaming has its fair share of limitations. Besides small screen sizes, the processing speeds and memory capacities limit gaming possibilities. Therefore, the future of gaming won’t be the same again.

Truth be told—technology has been evolving fast. Really fast! Here are trends that we expect to be the future of gaming industry:

#1: VR will continue to dominate the gaming industry

People have always loved 3D films since time immemorial. However, it’s not until in recent past that we saw a revival of 3D for gaming screens. We’ve also witnessed the evolution of video games regarding video quality so much that it’s almost impossible to differentiate a video game from real-life scenes.

Now, with significant technological leaps that have resulted in improved hardware capabilities, VR will continue to shape the gaming industry now and in many years to come. An example of such system is the Oculus Rift. Oculus Rift features a large field view of 107 degrees, quick response and integrates immersive stereoscopic 3D capabilities.

It’s no secret that there’s a booming market for mobile devices such as smartphones and tablets. Now with the cold war between the three major gaming brands—Sony, Microsoft, and Nintendo—intensifying, the rush to invent secondary gaming devices for players will continue to rise. We are likely to witness the growth of Wii U, SmartGlass and Sony Cross-Play like devices.

If you doubt the power of open source gaming, just look at the number of free homemade games that are available in the market today. You’ll realize that the homemade games have continued to increase. For instance, Ouya is an Android-powered video game console that is open source.

The growth of these open source gaming systems is understandable from the commercial point of view. In essence, independent game developers don’t want to buy expensive SDKs to create games and release them to the market. In this light, we expect Google and Apple—the two major brands that are shaping the mobile gaming industry—to play an active role in the growth of open source gaming.

Besides seeing your physical environment, augmented reality feeds you additional information in real-time when playing games. An example of an app that is utilizing AR is the Wikitude. With Wikitude, you can easily hold your smartphone and point it towards the surrounding environment so that it reveals the nearby restaurants, hotels, ATMs for your navigation.

In gaming, apps are already using AR to implement actions such as simple shooting. Going forward, we expect AR to continue reshaping the gaming industry.

With more steadfast and faster Internet connections, cloud computing has continued to gain momentum in recent times. The gaming industry will continue to tap into cloud computing to allow users have access games in a hassle-free manner.

Wrapping it all together

Stop a Business Foreclosure in its Tracks Using These 3 Tips