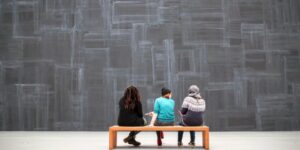 Not since the end of the 19th century has there been a golden age of museums quite like the one today. Over the last decade alone, museums have seemingly grown or advanced at a faster pace than at any other point in their history. It’s an era marked by grand openings, massive expansions and lavish re-builds – from the much-anticipated debut of the Louvre Abu Dhabi, to the re-introduction of San Francisco’s Museum of Modern Art in 2016.

It’s also a period where museum visitors everywhere are now more provocatively entertained than ever. Technology has given rise to new forms of audience engagement and innovative storytelling that has sparked widespread interest and given inanimate subject matter a new appeal.

Modern museums are leveraging a range of new technologies to create more deeply immersing experiences for their visitors. Take for example the use of Bluetooth, iBeacons and others to deliver clever way-finding experiences on mobile devices, or the utilization of Virtual Reality, Augmented Reality and Mixed Reality to animate subject matter and mesmerize audiences. But there’s a new technology that’s emerging that will take this golden age to even greater heights.

3D audio – or “Augmented Audio” – is about to redefine the museum experience for hundreds of millions of people around the world. 3D audio is much more authentic to our ears than two-dimensional stereo. It’s audio that replicates the way we hear in our natural environment – delivered through headphones. 3D audio envelops the listener by offering a spatial bearing that enables them to sense where they are relative to the noises around them. In a 3D soundscape, the origins of sounds can perceivably move about the listener, locating the listener as if they were standing in a real life environment.

Just imagine yourself at a museum, standing in front of a massive painting that – despite being a two-dimensional work of art – has amazing depth and allure. Visually, it draws you in and creates a sense of rapture. Now fold 3D audio into the experience with carefully crafted sound that wraps itself around you and pulls you closer. Characters in the painting sneak up from behind and encourage you to look deeper. Meanwhile, others call for your attention on the right, and then on the left. Suddenly, you’re a part of what’s happening on the seemingly “flat” canvas.

Narrators can also offer 3D audio cues to help usher you through an exhibit. Where traditional audio tours once had to tell you to “look to the left” or “walk straight ahead”, now museum visitors will hear the narrator gesture to them in their right or left ear, from far away or nearby, “Hey, over here!” The placement of the narrator’s voice will indicate to the visitor where they should go or where to direct their eyes. Manipulating this type of audible sensory perception has the potential to completely reshape the entire virtual experience.

Over the next year, 3D audio is expected to become much more pervasive in museums and elsewhere. A group of five companies called The BINCI Consortium – short for “binaural tools for the creative industries” – are working collaboratively to develop an integrated software and hardware solution that can be used by professional audio content creators and artists to ease the production, post-production and distribution of 3D audio content. The Consortium, which includes Antenna International, Eurecat, HEAD acoustics GmbH, 3D Sound Labs and Voodoopop, aims to develop a solution that can support a variety of professional applications in the creative industries, such as music, video games, Virtual Reality and Augmented Reality.

The BINCI Consortium is planning to conduct experimental 3D audio production pilots at a handful of museums across Europe over the next several months. These pilots, also known as “The BINCI Project”, will offer visitors the world’s most advanced encounter with 3D audio-guide productions and usher in a new era of immersive storytelling.

In the meantime, keep your eyes up and be listening for it.

Eva Wesemann is the Director of Creative Strategy for Antenna International, a provider of technology, content, and managed services to the world’s artistic, historic, and cultural institutions. She is also an active member of the BINCI Consortium.

How to express your thoughts: practical writing tips for students?