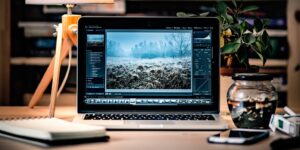 The MacBook and all its variations remains a popular laptop choice in 2018. But if you’re wondering if you should sell your MacBook and get a different brand altogether, you’re not alone. In some ways, Apple is falling behind the crowd in terms of laptop design and offerings.

Laptop Mag publishes a yearly report of the “Best and Worst Laptops.” The 2018 version has been released, and it sees Apple fall from fifth place overall in 2017 to seventh place overall in 2018. Apple is certainly known as an elite company in terms of all its technological offerings, so it may be surprising to know that other companies are quietly overperforming them in some ways.

How Apple Performed in the Report

The Laptop Mag report looks at five categories to determine how well each brand is performing. The five categories are Reviews, Design, Support and Warranty, Innovation, and Value and Selection.

Apple received 33 out of 40 points for the Review section, which was about average for all the brands. In the Design category, Apple received 11 out of 15 points. Only Samsung, which placed last overall, scored worse in this category. Apple’s strength shone through in the next category, Support and Warranty, getting almost a perfect score of 19 out of 20. This was the high score for this section out of all the brands, but it does beg the question: does Apple really have good products, or just good support? Probably a mix of both.

The Innovation category is where Apple completely bombed on this report, earning a mere 3 out of 10 points. Laptop Mag noted that the MacBook has not seen any major changes for several years, benefitting only from a slight increase in speed. It was also noted that other laptop brands have been incorporating touch screens, allowing laptops to be used as “two for one” products when you rotate the screen to use it like a tablet. Apple has steadfastly kept the iPad and MacBook separated, refusing to cross the two technologies and making their products feel a little behind the times in comparison to their competitors. Why pay for two products when you can get a two for one deal?

The final category, Value and Selection, saw a few brands receive a perfect 15 out of 15 points. Apple, on the other hand, received 6 out of 15 points. Apple continues to sell expensive, high-end laptops that typically start around $1,200. However, when the innovation and technology does not match the price, especially in a competitive market, it’s no wonder Apple failed this section as well. The only other brand to score as poorly was Razer, which also received a 6 out of 15.

Lenovo, HP and Dell were the top three laptop brands of 2018 according to this report. Acer and Asus tied for fourth place, and Microsoft came in sixth, a full five points ahead of Apple. Rounding out the selection were Razer in eighth place and MSI and Samsung, which tied for ninth.

A Good Night’s Sleep – Not a Dream Anymore!