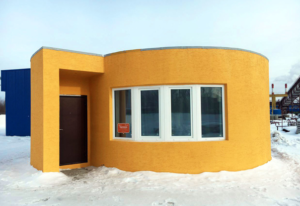 In a small Russian town, a San Francisco startup may have just given us a glimpse of the future – and it is very exciting. Tech company Apis Cor was able to build an entire house in 24 hours using a technology that is currently in its infancy – 3D printing. This was a giant leap forward in 3D printing and speeding up curing, because most people consider the technology to be good for nothing more than building small, innocuous items that have no real value because the printing process costs so much in comparison with the item that you are printing; proving that the technology is not yet viable.

However, this printed home may have changed all of that. Apis Cor used a mobile 3D printer to create a home completely from scratch without any prefabricated parts or repair of existing builds. Concrete 3D printers were used to create the walls of the house as well as the partitions and the building envelope, but it had to be painted by hand and workers had to come in and install the roof, do the electrical work and put in thermal installation. The result of the entire build was a livable 400-square-foot home that is about the same size as some of the tiny homes that you may have seen discussed in minimalist literature.

The home cost $10,134 to create. The doors and the windows were the biggest part of that. This could be huge in the world of home ownership, as 3D printing is just now starting to take off, and like all technology when it first begins, the cost is much higher than it will be in the coming years. Excluding the cost of land, it is conceivable that someone could purchase a home that size for what you might spend now on a used car. In fact, this technology could change the world, eliminating homelessness, eradicating the housing crisis and allowing for modular, stackable homes that could even solve population problems that experts say are inevitable in the near future.

The company uploaded a video so that you can see the entire creation process from the very beginning to the end. It’s fascinating. It shows everything that was built which not only included the walls, doors, windows and various other items that you might see in a new build, but it also included appliances, a television that is perfectly molded to fit the home’s curved wall and various other furnishings that you would not normally have with a new home build. Basically, the company was able to build a home that was fully furnished or nearly fully furnished for about $10,000; not including the cost of the land that was built upon.

Creating homes with 3D printing is not restricted to the smaller size either. You could theoretically create any size you want from a tiny garden shed to a giant mansion. The only restriction would be the size of the 3D printer. Several 3D printers could work together easily for speeding up curing and to create different parts of a home which could then be locked together sort of like tinker toys or Legos. This is simply one of the most exciting technological achievements of the 21st century, and it will be fascinating to see where things go in the future.