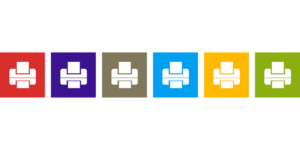 Historically, ink-jet printers have been defined by both their ink cartridge configuration and their razorblade marketing model where the printers are sold at or below cost and the printer supplier makes its profit on supplies. The problem with this model is that it isn’t very sustainable. The cartridges are made of plastic which doesn’t degrade well, and the printing company is financially motivated to sell you more of them.

HP has been a leader in sustainability for decades and has reconsidered at least some of its printers, most recently announcing a series of inkjet and one LaserJet tank-based printers.

Let’s talk about these new printers this week which are designed for home offices or small business offices.

The advantage of cartridge printers is that they tend to be cheaper to buy. However, they’re more expensive to use, which may be fine for low-volume users. But for high-volume users or users concerned about the growing excess of plastic waste, they aren’t ideal.

Tank printers are more expensive to buy (they may not be subsidized at all) but less expensive to use because buying ink in bottles in bulk is far cheaper per page than buying ink in a cartridge. In addition, because there is no cartridge to dispose of, the product is more sustainable and significantly reduces the amount of waste the printer generates.

So, while cartridge printers are initially cheaper, if you print in any volume, they are likely to become more expensive than their tank-based counterparts.  The cartridges have their own print heads which are designed to keep the cost of the cartridge down and they are typically replaced when you replace the cartridge. Tank printers, however, need to have a more robust printhead design because their printheads must last longer. HP’s new printers have sensors designed to alert you if your print heads are at risk (like if you let the ink reservoir run dry).

You also need to find a way to fill up the tank in the printer without spilling the ink or toner (toner can make a nasty mess if spilled and ink can permanently stain your clothing). Some of the greatest innovations in these new printers are in ink and toner delivery, which was impressive to watch when I was briefed on these new printer models.

So, if you print a lot or are focused on becoming greener in your practices, HP’s new tank-based inkjet and LaserJet printers may be right up your alley.

These printers have Wolf Security and always-on, self-healing Wi-Fi to better protect against printer-targeted cyber-attacks. They also include the now standard printer feature set that includes printing, scanning, and FAX (who still uses FAX?).

The Green Tech trend has been accelerating of late, but HP saw early on that it could make its biggest impact with products that currently use disposable materials. They’ve aggressively moved to create recycling programs for the ink cartridges and have shifted paper production to source it from sustainable forests. I expect HP will eventually lead with alternatives to wood pulp, like using paper made from hemp.

These recently announced tank printers are HP’s latest effort to set the bar for sustainability. Even the printers themselves consist of 45% post-consumer recycled materials, making them arguably one of the most sustainable tech products in the market. They’re ranked EPEAT Silver regarding energy consumption.

The reduction in waste is good wherever it occurs, and HP gets credit for setting the bar with its aggressive sustainability efforts as showcased by this latest line of tank printers.