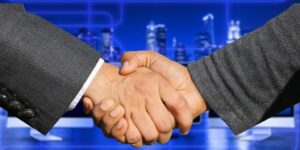 I’ve participated in partnership efforts with a variety of multi-national tech companies and found HP’s effort to rank near or at the top. Years ago, I was tasked with helping fix IBM’s program, and before that, I instrumented ROLM’s program (when ROLM was a subsidiary of IBM) for better market intelligence. The recurring problems with Partnership Programs are conflicts with the direct sales organization, issues with partner quality, a lack of company or executive interest after the partnership is formed, and little or no collaboration with the partnerships on product or services development.

One of the worst partnership programs I’ve seen is Apple’s which seems to treat its partners as unloved subordinates that are unappreciative of the honor of working for Apple and unwilling to give Apple all their profits. In sharp contrast, HP is one of the best, and I attended its latest partnership meeting, for their program called HP Amplify, last week. Here are my impressions.

It starts with partners as family

One of the things that jumps out at me at HP events is that the event is less about promoting products than helping and understanding partner issues and helping these partners resolve them. The focus isn’t on HP’s profits vs. the partner’s profits, but on how to make the partners more efficient, sustainable, effective, and profitable so that both HP and its partners are successful. It isn’t an us vs. them issue.

These meetings are more like family reunions than your typical partnership meeting and, while it is unusual at any vendor event for executives to demonstrate their disdain for each other, often divisions in firms compete for resources and that disdain can be seen if you look closely enough or if those executives simply aren’t invited to the event.

At HP, the executives really seem to like each other, ribbing or crediting their peers, often in the same talk, during the event and creating the impression that they like working with each other rather than secretly plotting each other’s demise. (I was at a Micron event once where it looked like two of the firm’s executives wanted to kill each other and nearly came to blows).

One of the segments that stood out to me at this event was on sustainability. HP has been one of the most aggressive companies on product and operational sustainability (controlling operating waste and reducing non-sustainable power usage) of any company I cover. With printing, HP also had the largest sustainability problems. It was able to get nearly all its partners to join its efforts which should result in a sustainability impact that leads the technology segment.

Reducing waste, pivoting to sustainable power, operating more efficiently, and making sustainability a priority, I believe, is critical for all of us, and HP, with its partners, set an impressively positive tone.

This doesn’t mean HP didn’t showcase some new products. Two that stood out to me were the new Dragonfly Folio which is my latest favorite laptop because it fits how I travel and work, and a new tank printer that is far more sustainable than those that use cartridges.

Dragonfly is HP’s Halo line, and it represents a showcase of HP’s capabilities. With both Wi-Fi and 5G it is highly connected, with Intel and VPro it is enterprise-approved, with its leather-like cover it is very comfortable to carry, and with a cantilevered screen, it works for movies on the smallest of commercial planes. The laptop is awesome.

Tank printers consume ink and don’t use plastic cartridges. They tend to be more expensive initially because they are harder to subsidize with supplies which also makes them cheaper long term because ink, for them, is also cheaper. If you don’t use cartridges, you don’t have to dispose of them, and while HP’s efforts to recycle cartridges are market-leading, they aren’t 100%. So not having the things in the first place assures that the plastics they are tying to keep out of oceans and landfills aren’t created in the first place.

Sales partners are a critical part of any national or multi-national company because no company, no matter how big, can be everyplace. Partners are where you can’t be, covering customers you can’t economically cover, but they still carry your brand. In past studies, I’ve found that companies that are mostly direct sales and don’t use partners typically have higher customer satisfaction, which seems like a contradictory statistic. But, when I’ve drilled down, I’ve found that the problem wasn’t using partners it was mistreating or not properly selecting, assuring, and provisioning them.

HP is an example of how to do this right, and at HP Amplify, I again was impressed with its approach and execution.

Japanese Man Earns A Living By Doing Nothing