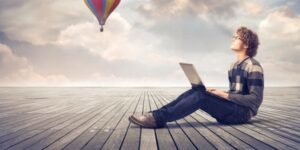 Google’s Translate service started out as an internet novelty. As people began to use it more widely, it became the butt of many jokes. “Did you use Google Translate for that?” would sarcastically follow any poor or inaccurate translation attempt.

But this taunting did not discourage the developers. Instead, Google and other leading brands toiled away at translation technology, aiming for total perfection. Now, their work has changed the world as we know it.

The advent of translation technology

After Google launched Translate, Microsoft was quick to follow suit with its own online translation software—Translator. Facebook, too, began working on algorithms to detect and translate languages, resulting in the optional ‘translate this post’ button, and eventually leading to opt-out auto-translation indicated by the ‘this post was translated by Facebook’ notice.

Despite the progress of these translation technologies, some have argued that they are impractical. For example, marketing bloggers have discouraged businesses from using auto-translation as the mostly literal translations of words these services provide are unlikely to be useful in a localised marketing campaign aimed at native speakers.

Translation agency Global Voices highlight the particular difficulty translation applications have with Chinese languages, concluding that they may get users through a short holiday in China, but they cannot be relied upon for business deals and transactions. “Although tech firms are finding innovative ways to improve them,” says Global Voices, “[translation technology] can’t yet be relied upon to provide a flawless translation.”

Still, tech giants are trying to address these concerns, with Microsoft recently updating Translator to allow group chat conversations, and boasting an improved comprehension of colloquialisms. Google has recently upped its game too, switching to what it calls ‘Neural Machine Translation’ — a system that memorises information about the meaning of phrases instead of mere phrase translations.

Though most of the developments in translation tech take place online, the technology’s biggest impact is fast being felt offline too. Far beyond the simple translated phrases of its early days, translation technology is now being used out loud, outside, and to outstanding potential effect.

This impact is clearest in Japan. In preparation for the 2020 Tokyo Olympic Games, Japanese planners are seeking ways to incorporate real time language translation into their designs. 500,000 foreign visitors made the trip to Brazil to watch the Rio Olympics last year, and the organizers behind Tokyo 2020 are expecting at least as many in three years time.

While many who attend the event will speak Japanese, as many will be native spectators, the planners do not expect all foreign visitors to master their language before they make the trip. Because of this, megaphones that translate speech in real time have been developed, and they are already being rolled out on Japanese public transport.

A Tokyo Metro station near Harajuku is one location trialing these futuristic devices. This video shows the Megaphone Translators in action, and frankly the technology is extremely impressive, even in light of the vast progress translation technology has made in recent years.

At the moment the devices are mostly used in case of emergencies in order to alert as many people to potential danger as possible. They are currently capable of translating an original Japanese phrase into English, Mandarin, and Korean. Developers at Panasonic are hard at work adding new language capabilities to their megaphones in time for Tokyo 2020, as thorough inspection reveals that their megaphones are only effective at translating 300 essential phrases.

Still, these megaphones point the way towards a future in which people will be able to communicate across the language barrier without learning a word of a foreign language. Whether we ever reach this point, or whether we should even try is up for debate, as the cognitive and cultural benefits of learning second languages have been widely proven. But for now, at large, multicultural events like the Olympics, translation technology is playing an important role in strengthening international communication.

5 Ways to Keep Track of Your EPF Balance