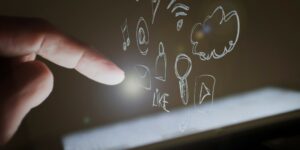 It has been around a decade since the first generation iPhone burst onto the mobile scene and brought the idea of mobile apps with it. Now, smartphones are ubiquitous, and their operating systems capable of running more advanced apps. They also feature some pretty sophisticated hardware and tech in terms of cameras, sensors and GPS that apps can tap into, making lots of things possible.

Now, if you have an idea for an app, whether it is one you would like to build and try to turn into a commercial success, or perhaps one you’d like to use as a custom tool within your own business, you have a few options.

Of course, you can learn how to develop an app from end to end by learning app development technologies, and also about broader software development practices like testing and release management. This may be the best route if you would like a long term career as an app developer, if you have multiple app ideas, if you already have some dev skills, or if what you want to do is especially unusual and would be difficult to build in any of the other ways mentioned in this article. Naturally, this is the most difficult and time consuming route to go down (unless you already have some of the skills), but the advantage of it is that whether this project is a success or not, the skills can be used again and again.

Another option that may be available to you is to buy the source code for an app that does all of part of what you want your app to do. There are marketplaces for finished apps and app modules you can buy ownership of, and then re-skin, integrate with other modules, or modify to create the app you’d like to sell or implement in your business. Prices vary depending on the complexity of the app and its perceived earning potential, but it can be a very cost effective approach if you can find the kind of functionality you want. Check out Sell My App to see the kind of apps and code you can buy. Of course, you may also want to consider selling your own code in this way if you go down the route of developing apps from scratch yourself.

Use a Template or App Building Tool

A third option is to use a tool or template designed to build apps without writing new code. This works in a similar way to building a website using things like WordPress themes, allowing you to create your own app by customising a template. This approach isn’t much good if the idea you have is especially innovative or feature rich, but can be a good way to build common types of custom business apps.

As you can see, there are a few different options open to you to start turning your idea for an app into a real product.

Why opting for CMMS makes sense?