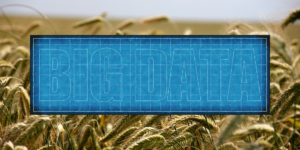 It’s shocking to think, as reliant as we are upon our farms and food supplies, that around one third of the crops and produce coming out of farms is wasted each year. That’s a third!

It’s not all down to people losing those green beans at the back of the fridge, though. Some of the loss is due to incorrect watering patterns, too little fertiliser, too much fertiliser, harvesting a few days too early or late, pests and poor weather. When the foods actually get to the supermarkets, they may spoil too quickly due to inadequate packaging or a truck that’s a few degrees too warm.

These are the problems that have plagued us since farming began, but big data is coming to the rescue with the help of an image analysis software company or two. Venture capital is streaming into agriculture technology, with investment almost doubling in the last five years.

How will this work?

At ground level, sensors can tell farmers if the soil is too dry, is in need of a phosphorus boost, or if the crops aren’t quite at peak ripeness yet. By using aerial drones, farmers can also keep an eye on pests and birds, as well as other potential problems and once the crops are harvested, RFID tracing can keep track of what goes where – be it the compost, the budget supermarket or the fancy farmers’ markets. By using analytics, savvy farmers can decide which crops are best in terms of both sustainability and profitability, which benefits the planet and the individual.

The market for agricultural software – yield monitoring, crop scouting, weather prediction, for example – is set to grow by at least 14% in the next five years. Once it’s widely adopted, this tech will see the biggest increases in productivity since farming became mechanised.

The consumers will also benefit

The consumers will also be able to use analytics to check their food before they even cook it. Sensors can warn people about a rise in the gases emitted by bacteria as food starts to go off, so they can discard the food. More than 8 million working days are lost each year in the UK due to food poisoning, costing the economy over £1 billion, so anything that helps the population to stay healthy helps us all.

Will it all be too expensive?

For this agriculture revolution to succeed – and we really need it to succeed – then the cost of the data and the analytics shouldn’t get in the way. It’s important for both farmers and the end-consumers to understand how the information is gathered and used and they must be able to trust it.

As industries become smarter, we will need strict, set standards and best practices for data collection and use, and ultimately this will mean an entire overhaul of our old communications networks. This isn’t just the responsibility of the agriculture industry alone, though, so the costs passed onto the consumer for this farming revolution shouldn’t cause too much pain. This is especially so when you consider the increased yields and better quality coming through with each grocery delivery.

Protect Against These Cyber Security Threats With PGP For BlackBerry