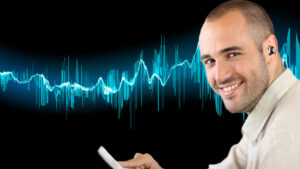 They’re everywhere. Wearable devices and activity trackers are on every arm in every town. No longer simply gadgets for tech-crazy early adopters, wearables entered the mainstream in recent years, largely via fitness tracking devices.

Their current form factor, epitomized by slim, sleek wristbands, is leading to a certain measure of market saturation and consumer burnout. Consumers are largely unwilling to modify their behaviors to ensure that wearables can deliver accurate data and function at peak performance. Additionally, devices such as Google Glass and the Apple Watch failed to achieve the kind of market penetration manufacturers originally anticipated.

Enter the hearable. Capitalizing on the ubiquity of devices we already use every day, the next wave of wearable gadgets aims to integrate wearable technology into hearing aids, headphones, and earbuds. By moving the tech from the wrist to the ear and eliminating displays, hearables are an ideal tool for enhanced hearing and communication, active noise cancellation, and the ability to truly hear what one wants to hear in the surrounding world.

Hearables are the next step in the evolution of headphones. These technically advanced devices move well beyond the current crop of Bluetooth earbuds to offer an endless array of potential applications.

Smart headphones can be used for fitness tracking, medical monitoring, as voice assistants, and can work seamlessly with augmented reality setups. Voice input capabilities allow users to receive results directly into their ears, making them an essential tool for any professionals that need information from their clients.

Combining high-quality audio with the functionality of a smartwatch, hearables are on pace to steal the market from traditional headphones and hearing aids. Your ears are a natural fit for using these devices as health monitors.

With a consistent level of blood flow, the ears offer a stable environment for measuring vital signs. Unlike traditional wearables, whose accuracy can be affected by the movement of your body, hearables are more reliable instruments for measuring heart rate and blood pressure.

A Little Bit of Background

Wireless earbuds and headsets have been available since for nearly ten years, though consumers seemed reluctant to adopt the technology. Following the 2006 release of Bluetooth Advanced Audio Distribution Profile (A2DP), headsets and wireless headphones became widely available with support offered on many cell phones.

The market for Bluetooth devices, however, was relatively slow to develop and did not see significant traction until the end of 2014. Wireless headphone manufacturers found that their supply could not keep up with the demands of holiday shoppers.

The move to wireless devices may owe credit to the omnipresence of mobile video. With mobile music, users did not need to have as much interaction with their devices; mobile video requires users to hold their tablet or phone in their hands, rendering the cord a cumbersome distraction.

The Next Big Wave of Wearable Technology

With big name electronics manufacturers poised to jump on the hearables bandwagon, we are about to see a massive wave of these devices flood the mass market.

Experts predict that the market for hearable devices could exceed $16 billion by 2020. The ability to tailor technology to multiple markets gives hearables the potential to pull market share from wearables, headphones, and medical hearing devices all at once.

One major indicator of the market potential for hearables is Apple’s recent foray into the scene. Always on the forefront of tech trends, the recent introduction of wireless Airpods paired with the iPhone 7 is a potent harbinger of the near-future shift of the market towards wireless, cordless headphones.

By making their products proprietary and completely removing any input device for traditional corded headphones, Apple is forcing their gigantic user base (and massive market share) towards hearables as their new normal.

Much like the transition from Walkmen to iPods over a decade ago, as Bluetooth wireless earbuds become the norm for a whole generation of users, hearable devices will become a dominant technology.