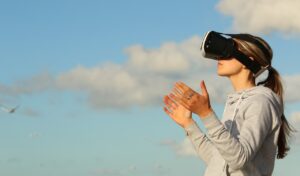 Oculus, one of the pioneers of modern VR technology, now lets users chat with their friends online in virtual reality. Launched a month ago, Oculus Rooms and Parties for Gear VR will enable you to link up with your friends in virtual space, as if you’re actually in the same room.

This 2017, these new features are set to be released for the Oculus Rift — the company’s flagship VR headset.

With Oculus Rooms, users are given a virtual room where they could hangout, watch Facebook videos, and play multiplayer games. Of course, the apps available for Rooms are currently limited, but there are several more planned in the upcoming months..

Oculus Parties, on the other hand, lets you connect with up to three friends in a voice call. A similar feature was demonstrated by Facebook CEO Mark Zuckerberg in Oculus’s “Connect” conference back in October, but it was only available to developers at that time.

The social media giant invested $250 million for the creation of more VR content, which bodes well for the industry this 2017. As a matter of fact, the momentum of VR in gaming and social media is already impacting the job market.

According to the infographic by KnowldegHut below, being a virtual reality engineer is one of the trending jobs in the IT space – along with being a blockchain engineer, cybersecurity specialist, and the Internet of Things architect.

Infographic courtesy of: The Future of IT – KnowledgeHut

Remember that Oculus Rooms and Parties are not the first VR apps to implement social features. Numerous indie apps like vTime and Riftmax also offered similar, multi-user features before. However, Rooms and Parties were the first to be integrated directly with Facebook and Messenger – enabling the masses to fuse VR with their social media experience.

Aside from Facebook, Oculus, and independent developers, media companies like the New York Times are also adopting VR technology in delivering new experiences to end users. With NYT VR, users can immerse themselves into news stories using VR and 360 video technology. This app, however, works with a different platform – Google’s very own “Cardboard”.

The collective efforts of innovators in different sectors may indicate that VR is the future. An analysis by Goldman Sachs shows that the VR market will outgrow TV in the next 10 years – ballooning to over $110 billion in revenue by year 2025.

Right now, there’s every reason to be optimistic about the future of VR. Platforms like Oculus Rooms and Parties not only open up the technology to the bigger social media market, they also demonstrate the possibilities on how VR can impact our everyday lives.

What is the psychological effect of hair loss on women?

How home Wi-Fi networks in Asia-Pacific are being Protected